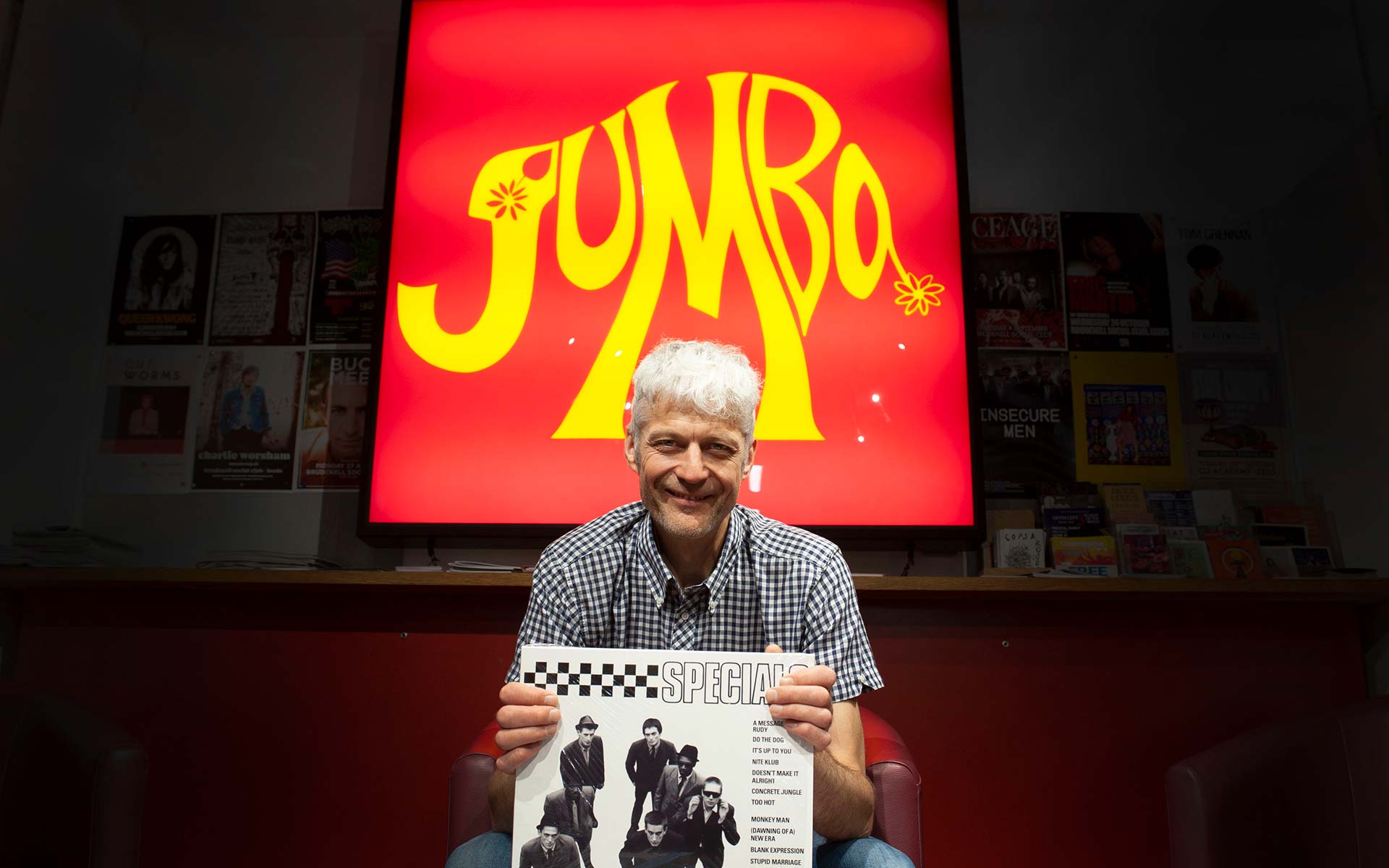 BACK IN THE GROOVE

Downloads were supposed to make record shops extinct, but as manager of one of the country’s best-loved stores Adam Gillison reveals how Jumbo helped the industry fight back from the brink.

Y ou can’t help but feel Adam Gillison should have chosen a more optimistic, a less grimly prophetic name for his band. Back in his youth he was the bassist in an outfit called The Losers and despite  once enjoying a little airtime courtesy of the legendary John Peel, it turned out there wasn’t much of a market for a band who were a cross between The Buzzcocks and Bob Dylan.

Still, while The Losers never troubled the charts, Gillison did manage to carve out a life in music and now heads up Jumbo Records, one of the country’s most successful independent record shops and a Leeds institution in its own right.

“I’ll never forget my first week here,” he says. “I remember being amazed at how long it took the customers to leave the shop. We’d be locking the doors at 5.20pm and they’d still be here at 6pm, standing around chatting. I think I knew then that this place was pretty special.”

It was 1997 when Gillison arrived behind the counter at Jumbo. That year as the Verve’s The Drugs Don’t Work and Blur’s Beetlebum went to number one there was still a little life left in the phenomena which had been Britpop, but the good times didn’t last long.

“Back in the late 1990s, the dance scene was also having a bit of a second wave and there were a lot of interesting things going on,” says Gillison. “The trip hop and funk scene were really important to us, but when that fizzled out we went into a steady decline.

“It lasted about 10 years and a lot of us, me included, thought we were witnessing the record industry’s slow death. Every few weeks you’d hear that another shop was closing and you did wonder whether it was going to be your turn next. It was pretty bleak to be honest and all of us felt pretty powerless to do anything about it.”

What happened next is a little piece of British music history. While every independent record shop had been fighting its own battle against closure, at the back end of 2007, 25 of them decided to come together at the Cockpit in Leeds to see whether they might fare a little better by pooling their resources.

“By then downloading was pretty well established and the end felt nigh,” says Gillison. “However, in  one last show of resistance we thought that maybe we should meet up and see if together we could find a way forward.

“As it turned out we all had such different customer bases that one blueprint was never going to work, but at that meeting the seeds of Record Store Day were sown and that has been a big part of reversing the fortunes of shops like Jumbo.”

By persuading bands to release limited edition records which could only be bought in participating shops, the aim was to champion independent stores and give those lapsed customers, who had become used to the convenience of streaming, a reason to browse the aisles again.

That first year in 2008 there were just 30 or so new releases, but by the following year it had mushroomed to 200 and at this year’s Record Store Day there were more than 400 limited editions up for grabs.

“We were a bit taken aback by how popular it was,” says Gillison. “We’d never really had to organise a queue before, but we learnt quickly. In the last three of four years much has been made of the vinyl revival, but really it started building a little while before that.

“White Stripe fans were always big vinyl heads, but it was The Strokes which proved a bit of a game-changer. When their first album Is This It was released on vinyl in 2001 we were inundated with pre-orders and gradually other bands began to realise that there was still a market for vinyl.

“Record Store Day has really capitalised on that and it has given us all a focus and a platform to tell people that we are still here doing what we have always done.”

While managing a record store is never going to make Gillison a millionaire, watching the industry return from the brink has been worth much more than any hefty pay cheque.

“I was one of those kids who spent all their pocket money on records,” he says. “The first one I ever bought was the Boomtown Rats album A Tonic for the Troops, which is not bad in the cool stakes is it and what’s nice is that there are still places like Jumbo where you can not only buy records by the bands you love, but where you can also be introduced to new bands.

“Some people think radio doesn’t sell records any more,  but it absolutely does. If someone new is played on 6 Music you can guarantee two or three people will come in the following day to ask about it.”

Two years ago Jumbo moved to bigger premises in the Merrion Centre and 40 years after it opened its doors it remains part of the beating heart of the city’s independent music scene.

“Leeds has always been pretty good for live music,” says Gillison. “While some of the old favourites like the Cockpit may be no more, I think we do pretty well for gigs. Places like the Brudenell Social Club and the Belgrave Music Hall are great for up and coming bands and with the First Direct Arena, the O2 and Millennium Square it feels like we have the right mix of venues now.”

When it comes to selecting what records Jumbo stocks, Gillison, who is a bit of a Two-Tone specialist, describes his approach as a benign dictatorship – all the staff have an input, but it’s he who makes the final call.

“We all have different tastes and that’s great because if a customer comes in with a specific request for a blues album or an electronica release it means there is always someone who can help.

“As for my own collection, it’s pretty big, but I have never been one to buy records as an investment, they are always there to be played and every one brings back memories.”

While Jumbo might not quite be the High Fidelity of Nick Hornby’s store it comes pretty close and Gillison is happy to count himself as one of the vinyl geeks.

“You can pretty much tell the day and the time by which customers are in the shop,” he says. “There’s one guy who always pops in at 9.30am every Friday to check out that week’s new releases, then there are the three guys who always come in together on the third Saturday of every month.

“You can’t buy that kind of loyalty, it’s something you earn. One of our regulars moved to France a while ago, but he still comes in twice a year and always leaves with a big bag of records. That’s what you call commitment.”