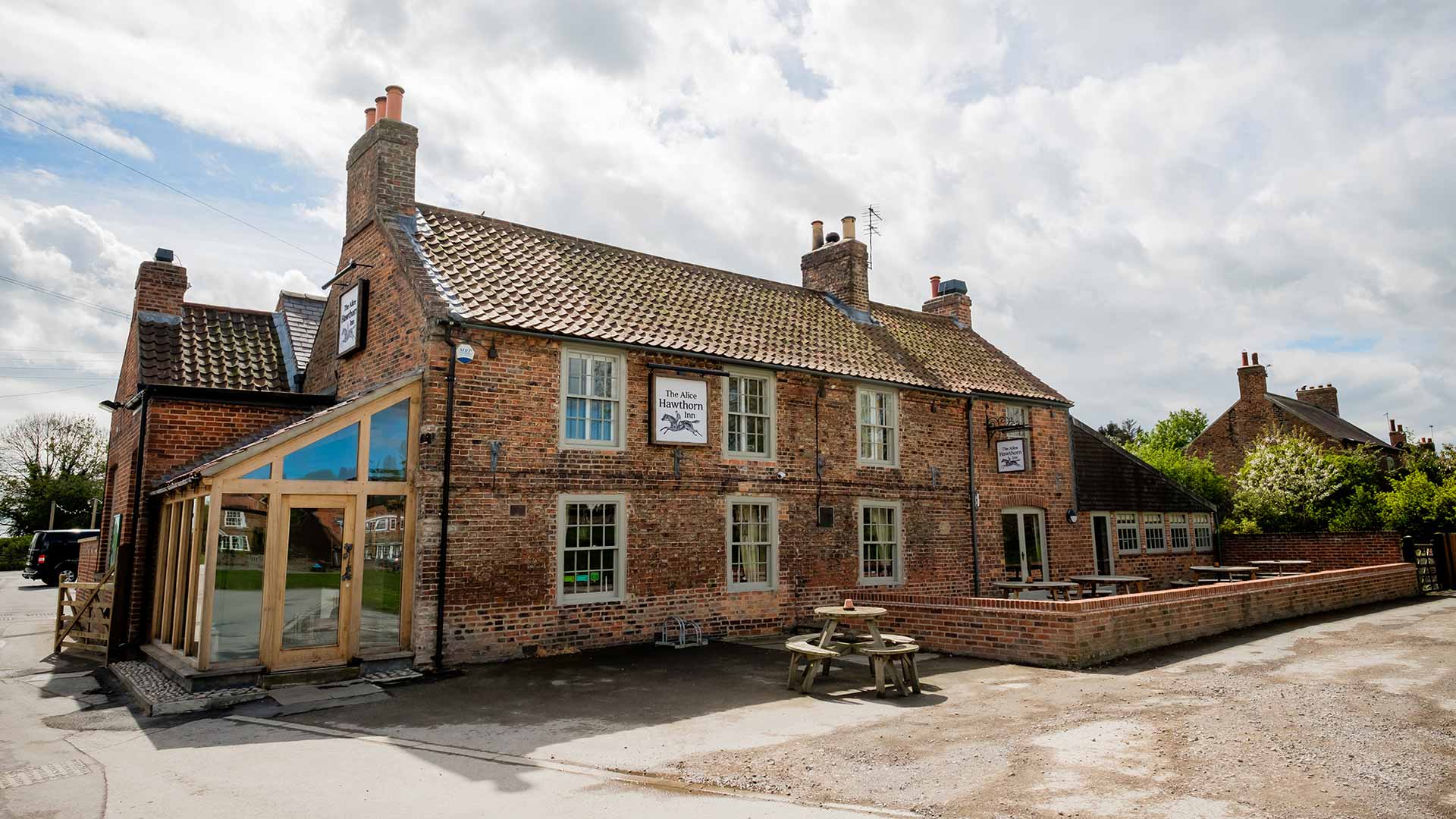 By Emma RowbottomNovember 10, 2021No Comments

The Alice Hawthorn has galloped to glory in recent years as one of the most charming places to stay and eat in Yorkshire. Emma Rowbottom visited to find out more.

As the old adage goes: appearances can be deceiving, and never more so than at The Alice Hawthorn. Billed (or rather underpromised) as a ‘pub with rooms’, this delightful gem, nestled in the quaint village of Nun Monkton on the edge of the River Ouse, overdelivers on every aspect to leave you with the feeling of not if you’ll return, but when.

The Alice (as it’s colloquially known), is a thoroughbred tale that’s as old as time. Named after one of the most famous prize-winning racehorses of the 1840s, the 250-year-old Grade II listed pub is both a surprise and a delight, offering a home-from-home appeal with both style, substance and sustenance at its heart.

Housed in the heart of the time-stood-still village between Harrogate and York, the inn was purchased by the Harpin family in 2013, who breathed new life into the centuries-old inn, developing it into a Yorkshire jewel that now houses 12 rooms, a pub serving light bites and delights (try Alice’s Sausage Roll and Popcorn Prawns washed down with Alice’s Rhubarb Bellini) and a dining room serving breakfast, lunch and dinner.

Perhaps one of the most notable things about The Alice is the ease and effortlessness with which its team, headed up by husband and wife John and Claire Topham since 2017, welcome and look after you every step of the way. In the kitchen, John and his head chef Simon Ball, have helped take this equine wine and dine to new levels and they now boast entries in the Good Food and Michelin Guides as well as being named regional winners in The Sunday Times Best Places to stay 2021.

We enjoyed an outstanding meal of seabass ceviche and slow-braised pork cheek parmesan risotto to start followed by a decadent Seafood Thermidor (including monkfish, prawns and king scallops baked in a creamy volute), and the Duo of Waterford Farm Beef (tournedos of fillet, braised ox cheek, dauphinoise potatoes and black truffle sauce).

The desserts were too tempting to turn away and so up stepped Sticky Toffee Pudding and a delightfully light Soufflé, baked in a pretty pink apple to round off a memorable meal. With a fantastic wine selection and an attentive team on hand to help with recommendations, it is little wonder this is the place on so many food lover’s lips at the moment.

Breakfast is served in the same dining space until 9.30am, while snacks are offered in the more rustic bar area, where wooden tables and a roaring fire are the perfect accompaniment.

The Alice Hawthorn feels truly in harmony with its surroundings. The four pub rooms boast traditional-style interiors, with wooden beams and stunning views of the green and our beautifully furnished room, The Alice (pictured above) boasted a walk-in, rainfall shower, luxuriously large free-standing bath, super-king bed and Bramley toiletries. Meanwhile the eight Scandi-style garden rooms are a nod to its agricultural heritage, constructed from home-grown Douglas Fir and finished inside and out with timber.

As certainties go, it’s a safe bet that the Alice Hawthorn is going to be on a winning streak for years to come.

Rooms start from £120 per night based on two adults sharing on a B&B basis.

The Alice Hawthorn
The Green, Nun Monkton
York, YO26 8EW

JEWEL IN THE CROWN