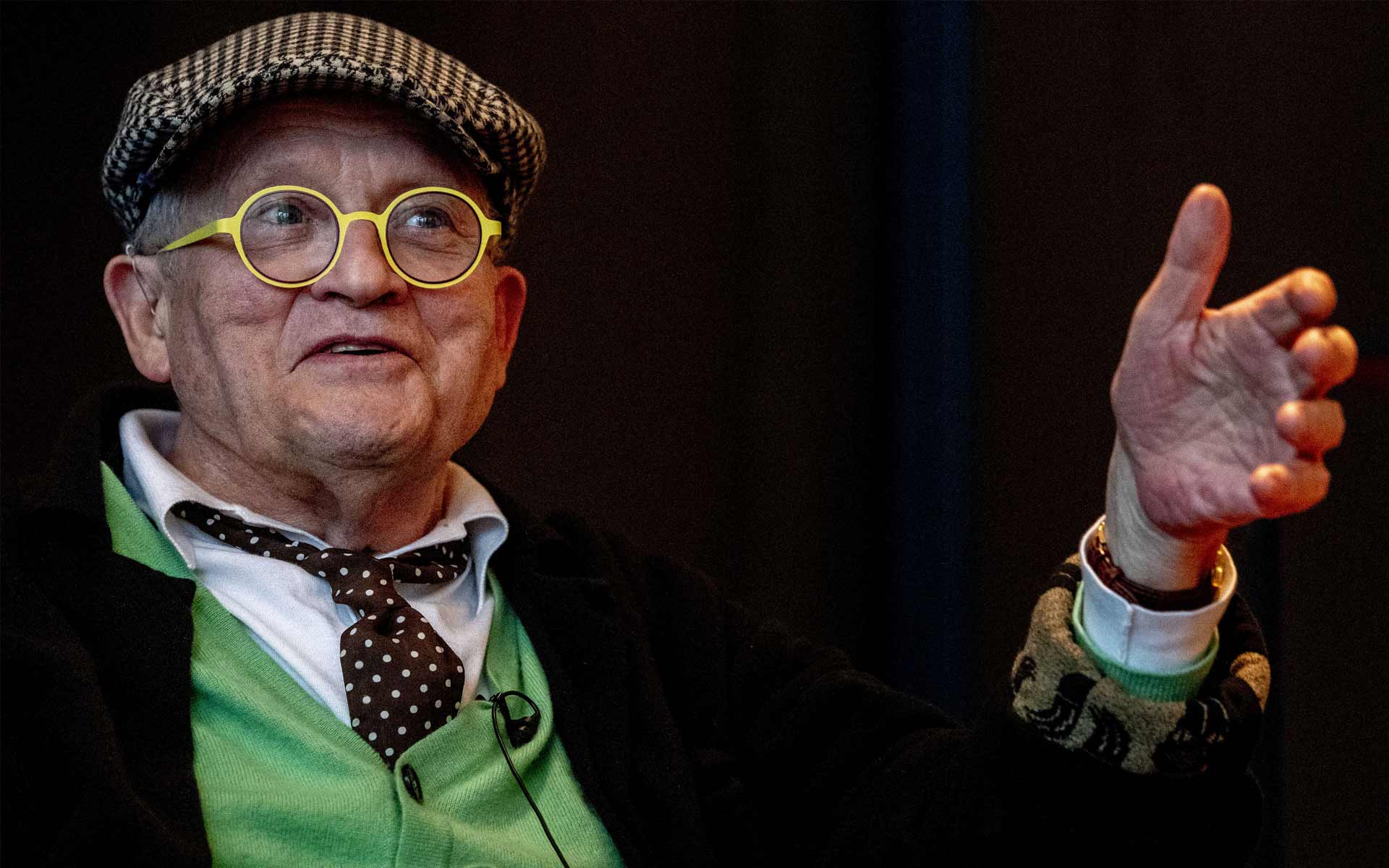 Yorkshire’s greatest export David Hockney might be 82 but he’s still living the LA dream. Here he talks about legalising cannabis, his new French adventure and relaxing with Laurel and Hardy.

S tanding on the wooden blue balcony of his Hollywood hideaway, overlooking the kidney-shaped swimming pool, the flamingo pink walls and the lush green palm trees that gently sway in the LA breeze, the master of the house breathes it all in.

Surveying the vivid colours, the shadows and the dancing reflections that feature in so much of his work, David Hockney stretches his 82-year-old frame against the bannister and does what he likes best.

He lights up another cigarette.

Welcome to the world of Hockney, unquestionably the greatest living artist and the favourite son of Bradford who is still living the Californian dream and loving every minute of it.

It is a setting that is a far cry from the bleak monotone streets of northern England where Hockney grew up in the fifties and a place that for nearly 40 years has been his spiritual home.

Old comfy armchairs, splattered in paint and arranged around a small coffee table covered in cigarette packets and overflowing ashtrays, are a tell-tale sign that the master has been at work and despite his advancing years, he’s showing no signs of slowing down.

A new exhibition, Drawing from Life, which opened at the National Portrait Gallery in February focuses on five figures whom he has painted consistently over 60 years: himself; his mother; his friend Celia Birtwell; Gregory Evans – his former lover, and Maurice Payne, a master printer and friend since the 1960s.

In addition to that Hockney is currently working on his latest project – inspired by a trip to Northern France in 2018.

Fascinated by the vibrant and changing colours of the Normandy landscape, Hockney decided to buy a farmhouse there and use it as a base to capture the four seasons in all their glory.

Reminiscent of his Bigger Picture exhibition in which he showcased the transformation of the Yorkshire landscape over winter, spring, summer and autumn, this latest project proves he’s never happier than when surrounded by the ever-changing face of nature.

While he will always be associated with painting swimming pools in the bright Californian sunshine, it is those kaleidoscopic seasons that always seem to draw him back and most excite him.

It was at Bradford School of Art that Hockney first learnt to draw and where his dad fixed up an old pram so his teenage son could push his paints and materials around the streets of Bradford and where he managed to sell his first painting – a portrait of his dad.

He recalled: “All my early portraits were of my parents and sketches of scenes I drew in the family kitchen in Bradford. My mother was a more willing sitter than my father, he couldn’t really sit still and was a fidget. But the first oil painting I ever sold was of my father, painted in our home in Hutton Terrace.

“I sent it to an exhibition of Yorkshire artists in Leeds. I never put a price on it, because I thought nobody would buy it. But they did, for £10, which was a lot of money in those days.”

From such humble beginnings, a trip to LA in the 60s must have felt like somebody had finally switched on the lights and it was a place he instantly fell in love with.

Recalling his arrival in LA he said: “Suddenly there was colour, so much colour and light. And with the bright sun you get the deepest shadows.”

It inspired some of his greatest works including Portrait of an Artist (Pool with Two Figures) from 1972 which became the most valuable work of art by a living artist when it sold for £70 million at auction in 2018.

But money has never been his biggest incentive and while he could have increased his fortune even further, he chose instead to donate many of his paintings to Salt’s Mill in Saltaire when it first opened.

He loves re-telling the story of his visit there when he overheard an elderly lady looking at his work, and saying, as she shook her head “Huh! My four-year-old granddaughter could have done better!” The lady was quietly taken to one side and told that she had been introduced to the artist who had painted the work that she had dismissed.

“Well”, she said, “he seems to be a very nice young man, I’ll give you that. But… my granddaughter could still do better!”

Now approaching his 83rd birthday, Hockney can smile at himself with a refreshing level of self-depreciation and when he’s not painting, there’s nothing he likes better than reading or watching his beloved Laurel and Hardy.

He said: “I’m reading more now than I’ve ever done in my life and I love watching Laurel and Hardy – it’s their sense of audacity and mischievousness that appeals.”

It is that same sense of mischief that Hockney himself possesses and smoking remains his greatest and favourite act of defiance in a world that is increasingly intolerant of the habit.

A constant chain-smoker, Hockney is also a big supporter of California’s decision to legalise cannabis. He said: “I always assumed they kept marijuana illegal because of the power of the alcohol lobby. That’s their competition. But the alcohol lobby has become less powerful, and of course there are lots of people now in their seventies or eighties who’ve smoked marijuana for 40 or 50 years. And they know it’s harmless.”

He admits to smoking it himself — not when he’s working, but in the evening to relax.

As to whether he’ll ever quit the cigarettes, he smiles and says: “Well I’ve had three doctors in the past 40 or so years. They all told me to give up smoking and now they’re all dead!

“I think the most important thing is laughter and you know why? It is the only time as human beings that our fight-or-flight response is turned off. It’s good for you.

“I’m lucky in that every day for the last 60 years I’ve done what I wanted to do. Not many people can say that. I’ve been a professional artist and just painted every single day.”

And with that David Hockney reclines on his balcony, lights up another cigarette and disappears into an artistic plume of defiant smoke.