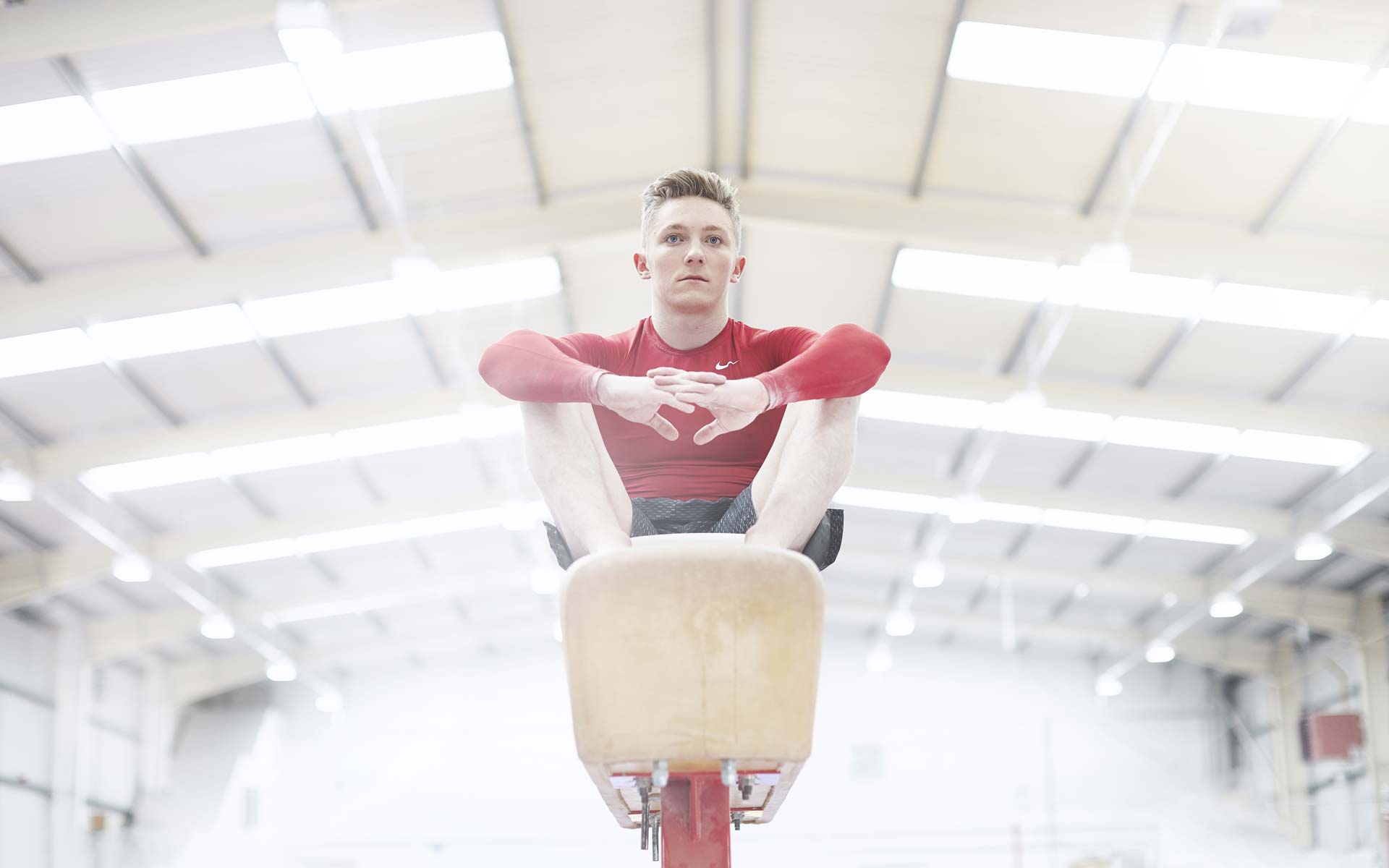 A LEAP OF FAITH

Nile Wilson’s profile has never been higher. After adding five more medals to the tally at the Commonwealth Games, the Leeds gymnast tells beyond how YouTube is turning him – and his dad – into virtual stars.

N ile Wilson is one of Britain’s most successful ever gymnasts. He’s also fast emerging as a YouTube star with one channel dedicated to his training and another where he and his dad film the pranks they play on each other. It’s difficult to know which is more exhausting to watch.

“I know, my dad has become a bit of a star in his own right and believe me he didn’t take much persuasion to get in front of the camera,” says Nile, who is just back from a well-earned break in Gran Canaria. “We were just saying the other day how brilliant it is that we wake up, roll the camera and do something we love for a living.”

Nile and Neil Vlogs launched in April and the pair have already attracted 100,000 subscribers, who have so far watched Neil dump his son’s PlayStation 4 in the bin and tackle him on live TV.

As well as being a bit of a master of the parallel bars and the pommel horse, it turns out that Nile is also a natural salesman and the vlogs are his way of ensuring he has a career once the gymnastics has run its course.

“After we speak I’ve got another video to edit. I love it, I always have,” says the 22-yearold, who still lives at home with mum and dad in Leeds. “Not many people know this, but I uploaded my first ever YouTube video in 2007. I was 11 years old and I just thought it would be a good way to document my routines and the training. Obviously back then I didn’t expect it to grow into the monster it has become.”

His training channel now boasts an impressive 780,000 subscribers and his Ultimate Gymnastic Challenges, where he takes on youngsters and sees who can climb the rope in Leeds Gymnastics Club the quickest regularly get a few million hits from his legion of fans known as the Wilsonators.

“One of those went viral and the last time I looked it had been watched nine million times. I mean that’s insane and of course it’s nice that people seem to like the things I post, but I don’t allow my self-esteem to be measured by the number of hits I get.

“For me it’s a brilliant way to tell a story and to give people behind the scenes access and a flavour of what it takes to be part of Team GB. I also really love the editing process and when my competing days are over it’s definitely something I want to pursue.”

There is though still a few years left in the tank and if his performance at this year’s Commonwealth Games is anything to go by, Wilson will need to make some more room in his trophy cabinet. Despite nursing a wrist injury, he came away with five medals, three of them gold, including an individual in the artistic all-round event.

“Every competition you take part in you want to come away with gold, but at the Commonwealth Games I was definitely more focused on the team event rather than my own individual chances for a medal. To be honest, just getting there was an achievement because for a while I didn’t know whether I was going to make it.”

Unable to put his full weight on his wrist he was forced to adapt his pommel horse routine. It meant he couldn’t achieve a top score, so he knew each of his other events would have to be flawless.

“The atmosphere was brilliant out there. It’s not the Olympics, but the Commonwealth Games are still really important. This is my job and whatever competition it is, you have to give it your best.”

After his events had finished Wilson spent a couple of days at the Gold Coast as a spectator, watching the rest of Team GB compete and soaking up the atmosphere of the athletes’ village. However, while he boarded the plane with a clutch of medals, he admits that success does little to mask the inevitable post-competition blues.

“Yeh you really feel the comedown. I just try to keep busy, but when the buzz and the hype disappear there is a bit of a void. I booked a holiday to Gran Canaria. I knew it would be important just to get away with my girlfriend Gabrielle, clear my head and give the wrist a complete break before coming back and starting again.”

While he’s not the type to spend two weeks lying on a sunbed, the enforced period of relaxation allowed him time to spend on his new obsession, Fortnite: Battle Royale. He and the rest of the gymnastics team started playing the online gaming phenomena out in Australia, where 100 players compete to be the last man standing and while he says he’s not very good, he has become mildly addicted.

It seems Wilson is human after all and it’s also good to know that he struggles just like the rest of us to get back into shape after a holiday.

“You know that feeling when you go back to the gym after a couple of weeks away? Well for me just imagine that same feeling times 100. It’s horrendous, but I know that if I don’t put the brakes on every so often I will burn out. You can’t keep training at the intensity we do 365 days a year, it’s just impossible.

“The wrist still isn’t right, but we’ll get there and I am having regular physio sessions and just gradually building up the training. The European Championships aren’t until August and then there’s the World Championships in Qatar in October so there’s time to make sure I am 100 per cent fit.”

Wilson’s breakthrough came at the 2014 Junior European Championships when he became the first Brit to claim five gold medals. He cemented his reputation by claiming the Commonwealth and European titles two years later and since then he has helped spearhead the renaissance of British gymnastics.

Injury notwithstanding, he should also make it to the 2020 Olympics in Tokyo where he will be hoping to better the bronze he got on the horizontal bar in Rio.

“Tokyo is the dream, but I try to live in the moment. It doesn’t help to plan too far ahead, I just try to focus on what’s next.”

For Nile that’s Glasgow and those European championships and planning his revenge for that lost PlayStation 4.