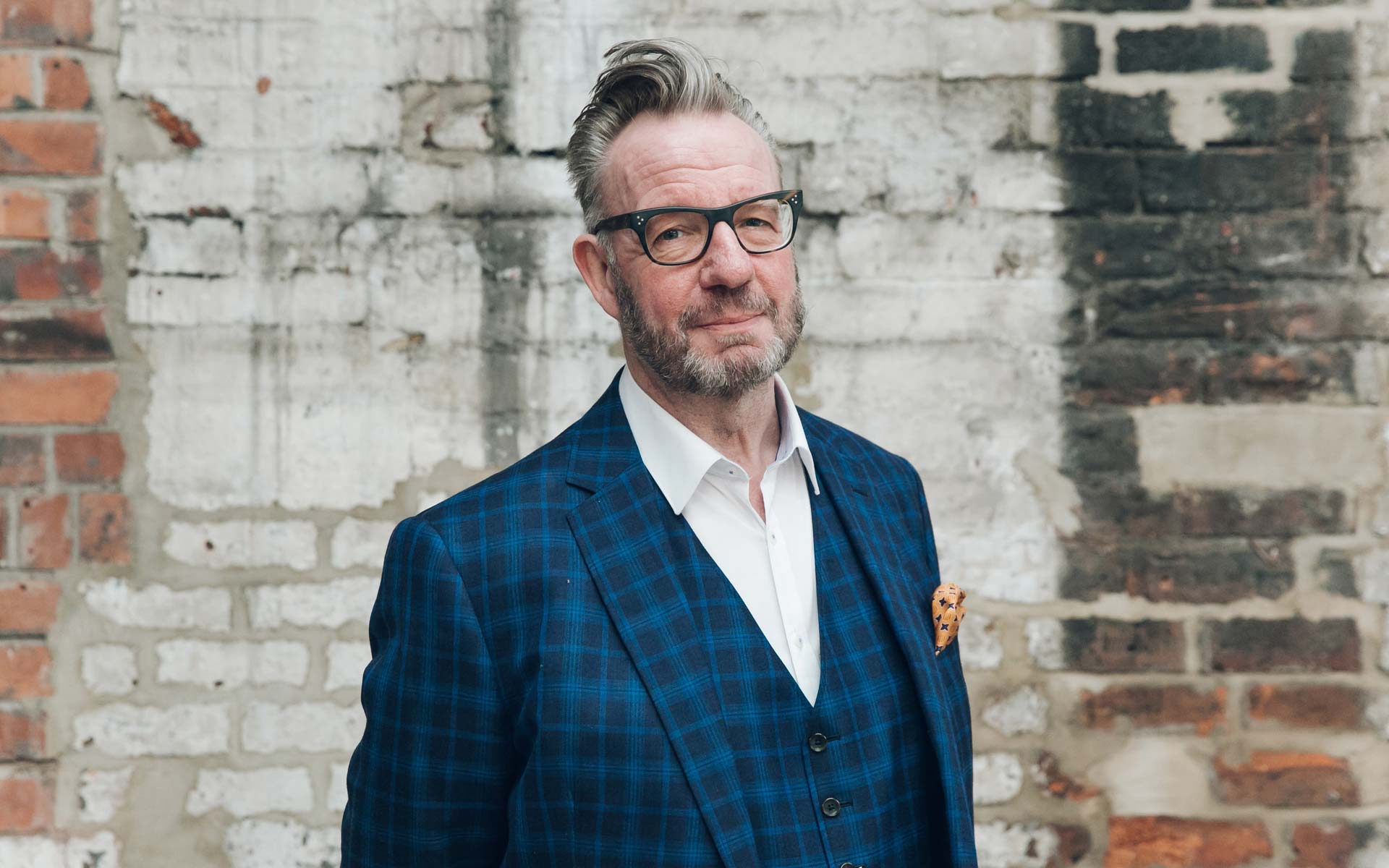 He spent 40 years scraping a living on a Yorkshire council estate. Now one of the country’s most in-demand artists, Pete McKee’s new exhibition will be a celebration of working class heroes, Sarah Freeman went along to meet him.

T he next time a national treasure disgraces themselves we should call Pete McKee and ask him if he’d like the job. His credentials? Well, he’s smart, funny and a natural raconteur. He’s also an artist who has worked with the likes of Noel Gallagher, Arctic Monkeys and the fashion designer Paul Smith, sports a perfect quiff and is a self-styled champion for the working classes.

“I was only able to get a mortgage and buy this house eight years ago,” says the 52-year-old making a cup of tea in the kitchen of his modest Sheffield semi. It’s painted in the same bright colour palette he uses for his paintings and is packed with retro odds and sods. “I know what it’s like to scrape around to buy an electricity card to see you through the weekend. That’s ordinary life for a lot of people. There’s a strength, dignity and humility about it and yet we have somehow allowed Britain’s working classes to be demonised.”

The tipping point for McKee came two years ago with the Brexit referendum. Unwilling to be on the same side as Nigel Farage, he voted to stay in the EU and like most Remainers he was surprised by the result. What shocked him more though was the bile directed at those who had placed their cross in the leave box.

“There was an assumption that it was the fault of the working class and they had only voted to leave because they were too stupid to grasp simple economics. I haven’t come so very far from where I started off and I can understand why someone like my brother voted to leave.

“He still lives on the council estate where we all grew up and as he said, his ‘Life can’t get any worse, so why not take an opportunity to shake things up?’

“The more I saw the people I love being pilloried, the angrier I got. At the time I was thinking of a theme for my next exhibition and after Brexit I knew I had my title.”

This Class Works, a celebration of the NHS, rain-soaked summer holidays at the British seaside and the hope that better times might just be around the corner, will be hung in a now redundant Sheffield factory and when we meet, McKee is just finishing the final painting in the 30-strong collection. It’s his take on a religious triptych painted straight onto 12mm MDF.

“I didn’t want this exhibition to be overtly political, I wanted it to be personal,” he says pointing to a painting of a girl holding a bag of Monster Munch. “That one is called Let Them Eat Crisps and it was inspired by the news the government was thinking of getting rid of free school meals.

“I lost my mum to cancer when I was seven years old and when I was 12 my dad, who was a machinist in a factory, had an industrial accident and wasn’t able to work. Overnight I became one of those kids who got their uniform paid for by the council and who had to queue up for dinner tokens.”

Propped up by his drawing board is another of the collection – National Hug Service, a nod to his own recent spell in St James’ Hospital in Leeds. In 2014 McKee was diagnosed with a genetic liver disorder and 12 months ago underwent transplant surgery. “I thought with a few lifestyle changes I might be able to stave of the transplant. I stopped drinking, watched what I ate, but I didn’t realise how damaged my liver was. I was put on the transplant list last April and six weeks later I got the call.

“It was incredible really, I went in on the Monday and was back here by Friday teatime. If I wanted to I could drink again but I don’t. I even went to a wedding with a free bar recently and all I had were cups of tea and coffee.”

Glancing through McKee’s extensive portfolio it feels like he has been around forever, but he was a relative late comer to the art world.

“I started sixth form, but spent most of my time in the common room playing cards. Eventually my woodwork teacher collared me and asked me what I was doing there? The truth was I didn’t know. Academia wasn’t for me, so I asked my brother if there were any jobs going at his factory.

“It was only supposed to be a stopgap. I was 16 years old, I wasin a band and I honestly thought that I would be rich, famous and on Top of the Pops within the year. When the record deal failed to materialise and when we were still playing to 15 people in the local pub I thought I’d better get myself to night school.”

Armed with a few qualifications, McKee applied to art college, but was turned down. It still smarts a little, but the last 20 years has been his way of sticking two fingers up to those who told him he wasn’t good enough. Setting himself as a freelance cartoonist, initially for the Sheffield Telegraph, he supplemented his income working as a postman and then at Tesco.

“I assumed that’s how life was going to be, but then one of my friends turned 40 and as a present I thought I’d do him a painting. The style was inspired by a couple of pop artists and a couple of cartoonists. It was really simple, but people seemed to like it and I thought, ‘I might be onto something here’.”

He was and having rustled up a few more paintings and reckoning that more people got to pubs than art galleries, McKee staged his first exhibition in a local boozer. He sold enough to buy his children the best Christmas presents they’d ever had and within three years he had given up the day job at the supermarket to become a fulltime artist.

“I’d got £7,000 worth of commissions and sales in the bag, which was about what I was earning at Tesco . My wife suffers from bipolar and wasn’t well. I was struggling to get time off to be with her, so I thought, ‘Right, that will see us through six months. I can give up work, be around for Jane and see if I can make the art pay’.”

Twelve years on McKee has never looked back. He now has his own shop and gallery in Sheffield and along the way he’s also won a few high-profile supporters. In 2001 Smith commissioned him to create a selection of images to commemorate 20 years since opening his first store in Japan and he has collaborated with Gallagher numerous times.

“I sent him one of my prints called A Good Education,” he says. “It’s of a lad sat on a bed with a guitar listening to the Beatles’ Revolver album. He liked it and when he wanted someone to produce a set of limited edition posters to sell in aid of the Teenage Cancer Trust he asked me.”

Music is McKee’s other love. He’s a member of the ukulele band the Everly Pregnant Brothers, that quiff is a tribute to his hero Edwyn Collins and he sees putting together an art exhibition much like creating an album.

“All the paintings are songs. Some are classics, the ones that people want to buy, others are more personal and introspective which people will find interesting but probably won’t want to hang on their wall. Together though they should tell a complete story.”

This Class Works, which runs over 16 days, will be McKee’s biggest exhibition to date, but ask him what’s next and he shrugs and laughs.

“I don’t know. I’m still that kid playing cards in the common room, just these days I’m getting away with it.”

This Class Works, 92 Burton Road, Sheffield, July 14th to 19th.
Tickets must be booked in advance at thisclassworks.com.