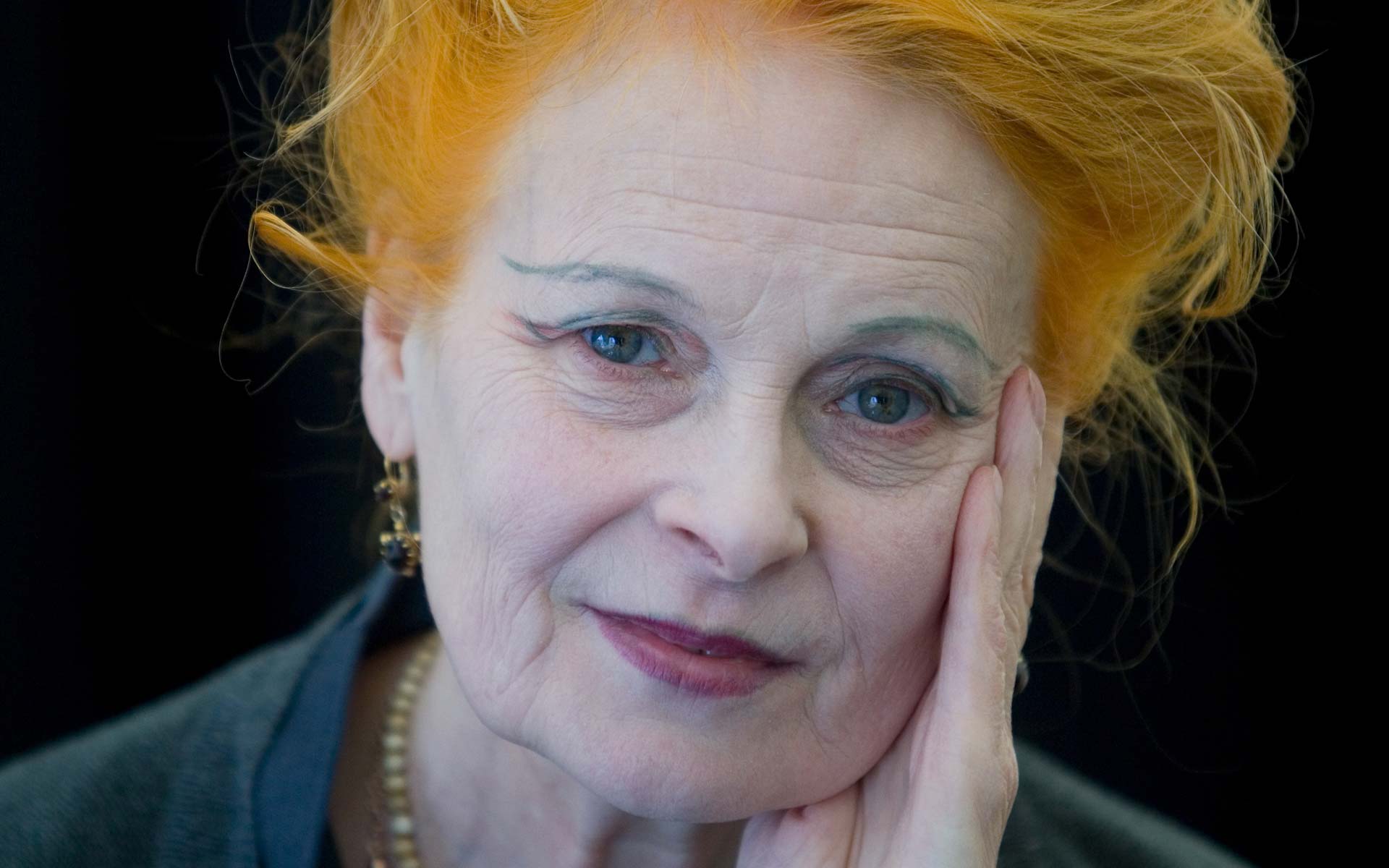 IN THE FOOTSTEPS OF GREATNESS

She is the grand dame of British fashion and while it is almost 50 years since she brought SEX to the King’s Road, age has not wearied the force of nature which is Vivienne Westwood.

T he story which reveals most about Vivienne Westwood is not the one where she went to collect her OBE from the Queen, did a twirl for the cameras and accidently revealed she was wearing no knickers. No, it’s the one from a few years later when she was back at Buckingham Palace this time to be made a Dame. With the Press gathered, Westwood, who also happened to be wearing a pair of silver horns, was asked whether she was again minus her underwear.

“Don’t ask. It’s the same answer,” she said. “I don’t wear them with dresses. When I’m wearing trousers I might – my husband’s silk boxers.”

That was in 2006 and even today having recently turned 77 she is as gloriously anarchic and unrepentant as she was in the 1970s when she and her then partner Malcolm McLaren opened the now infamous SEX Boutique, which announced its arrival on London’s King’s Road underneath a bright pink neon sign.

It was Westwood who dressed the decade’s punk movement and who introduced the country to bondage trousers held together with safety pins and bits of bicycle chains, T-shirts featuring half naked cowboys and shoes with killer heels and metal spikes.

While her designs were considered outrageous and some more sensitive souls saw her as a threat to the country’s moral fibre, Westwood has never been interested in grabbing easy headlines and her clothes have always been designed to do more than simply shock.

“My ambition has always been to make the poor look rich and the rich look poor,” she once said. “It is an artist’s job to wreak violence on a culture to give it new life. I didn’t consider myself a fashion designer at all at the time of punk. I was just using fashion as a way to express my resistance and to be rebellious.”

That philosophy can be seen in her trademark tartan bustle skirts suits, those corsets which she somehow turned into a symbol of freedom rather than repression, and her gravity-defying shoes, a private collection of which is coming to York Castle Museum this summer.

It was a pair of Westwood’s nine inch high platforms which famously derailed Naomi Campbell on the Paris catwalk in 1993 and the exhibition will include a version of that famous pair alongside Westwood’s iconic black spike SEX shoes from the 1970s, her hammerhead shoes with their elongated square toe and her pirate boots which remain a bestseller today. All are now considered design classics as is Westwood herself, but she hasn’t been immune to ridicule. Back in the late 1990s when she appeared on the Beeb’s ratings-winning chat show Wogan she was pretty much humiliated by stand-in host Sue Lawley and fellow guest Russell Harty as she showed off her new Time Machine collection.

They laughed at her rocking horse shaped shoes, they poked fun at the models wearing her latest designs and with Westwood looking increasingly bewildered it was left to Janet Street Porter to be her lone defender.

Thankfully these are more enlightened times. Westwood’s legacy is now getting the mainstream credit it deserves and fans of VW will be in their element as her private collection of shoes hot heels it to York.

“Each pair of shoes is a work of art in its own right,” says Emma Hamlett, senior curator at the museum. “These are more than just footwear. They tell a story about a really exciting period in British history. The punk era was revolutionary and the clothes they wore were a part of that story.

“Vivienne Westwood has always been influenced by historical design trends and has taken her inspiration from everything from 18th century French paintings to medieval armour.

“What makes this exhibition a little bit different is that we will also be displaying some of the historic shoes from our own collection to show how her iconic designs fit within a wider timeline.

“There is a beauty of both design and manufacture about Westwood’s shoes. Every pair has a really interesting tale to tell and something important to say about the time in which they were made.”

Westwood’s own story is just as compelling. Born Vivienne Swire in Glossop, Derbyshire her father was a cotton mill worker and even when the family moved to London when she was 17 she seemed destined to lead a similarly ordinary life.

Married at 21, soon afterwards she had her first son Ben and following a brief spell studying silver-smithing at Harrow School of Art she dropped out. Art, she had decided, wasn’t a viable career for a working class girl. Fortunately for the fashion world she kept making jewellery, selling it from a market stall on Portobello Road.

It was there that she met Sex Pistols manager Malcolm McLaren and the attraction was instant. Westwood’s marriage ended soon afterwards, she moved in to a council flat in Clapham and together they embarked on a creative partnership which left its mark on both fashion and music.

“He taught me everything,” Westwood said of McLaren. “When I met him I had hardly read a book and never seen a play.”

While most of those whose stars burned brightly in the 70s soon faded, Westwood’s remains undimmed. Still heavily involved in the fashion business which bears her name, these days she is as much a political campaigner as she is a designer.

Over the years she has joined in nuclear disarmament demonstrations, cut off her hair to highlight the dangers of climate change and at the last General Election Westwood gave her endorsement to the Labour Party and Jeremy Corbyn.

And just as she did in the 70s she is still using fashion to make a point, from making her catwalk models wear badges in support of Chelsea Manning, the US soldier jailed for passing on documents to Wikileaks, to collaborating with the non-profit organisation Farms Not Factories by creating a range of T-shirts and tote bags using ethically sourced cotton.

“My clothes have a story,” she told her biographer Ian Kelly. “They have an identity. That’s why they become classics.”