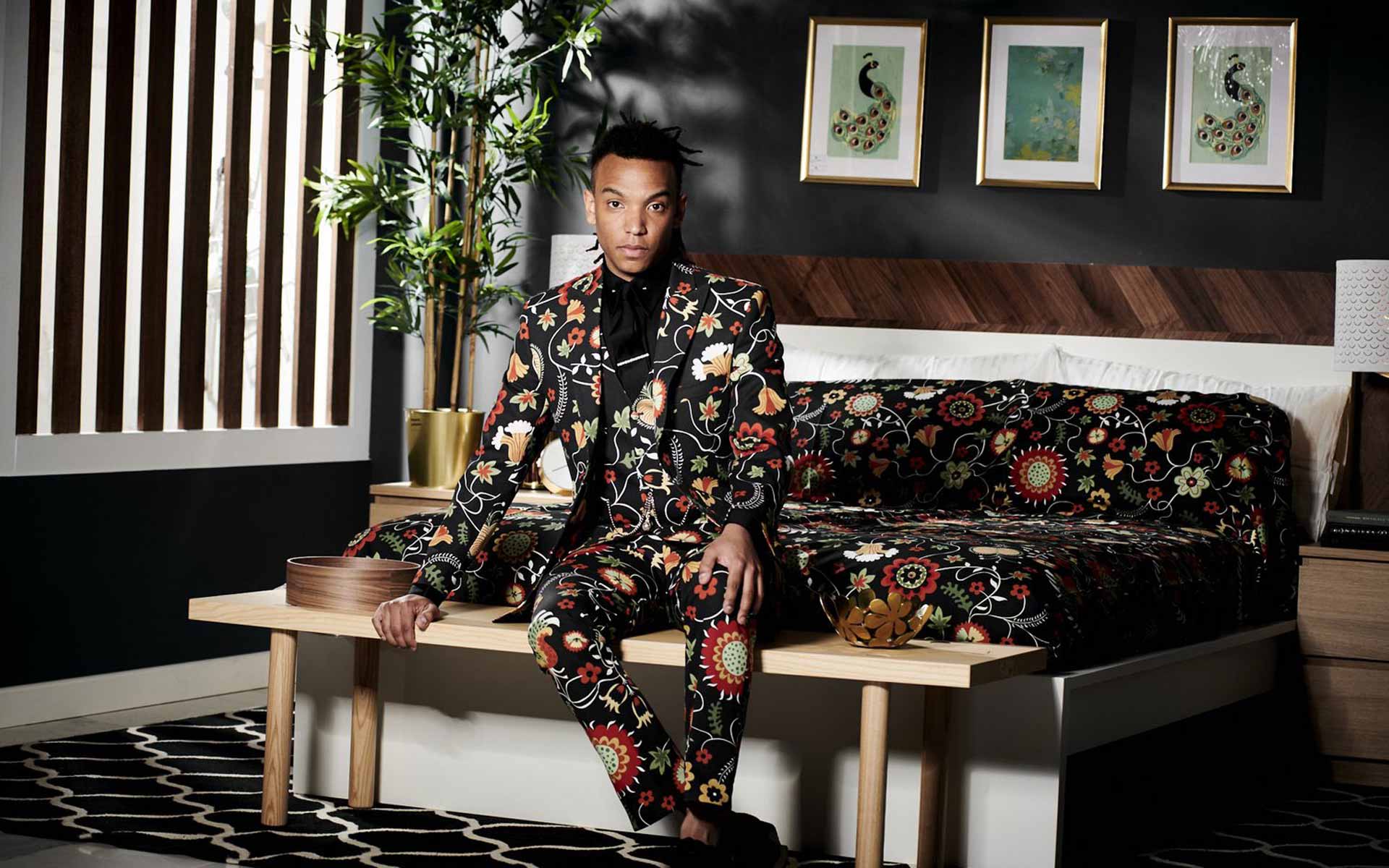 At the World Cup his waistcoat had its own Twitter account. Now as Gareth Southgate prepares for the autumn internationals, we meet the man behind the Harrogate tailors who ensures the England manager is always stylishly kitted out.

W illiam Hunt has no shortage of stories to dine out on. Spend a little time with the tailor who brought an injection of northern spirit to Savile Row and he might tell you about beating Clint Eastwood over 18 holes of golf, why Christiano Ronaldo now considers him something of a lucky charm or how he ended up on the credits of the Spice Girls film.

He is a natural raconteur and thanks to this summer’s World Cup there’s now another anecdote to add to the pot. When all round Mr Nice Guy Gareth Southgate won plaudits for looking as good off the pitch as the England team did on it, Hunt also found himself in the spotlight, outed as the man responsible for the phenomena which was Waistcoat Wednesday.

It wasn’t entirely accurate. In Russia, Southgate’s suits – and that waistcoat – came courtesy of England sponsors Marks & Spencer, but the former Aston Villa and England star is one of Hunt’s long-standing clients and a regular at the Harrogate store.

“He is a lovely man and a good-looking boy in a very British way,” says 58-year-old Hunt. “While I’m not sure I can take credit for all the attention he got at the World Cup, it’s nice to think we played a part along the way. Gareth lives near Harrogate and has been coming to us for the last four years and he’s always had a great sense of style.

“He is incredibly laid-back and charming, but he also knows exactly what he wants, which always makes our job easier. He looks great in a suit and wasn’t it good that just for once we were admiring the style of an English football manager rather than the Italian or French?”

Southgate, who lives at the £3.25m Swinsty Hall just a few miles from Harrogate, isn’t the only footballer to have been won over by Hunt’s take on classic tailoring. Christiano Ronaldo wears one of his suits every time he is nominated for the Ballon d’Or or at least he has ever since the year he chose another designer and lost out on being named world player of the year to Lionel Messi.

“Footballers are a superstitious lot, but if Ronaldo thinks we bring him good luck then that’s good with me. People are often surprised when I tell them he’s a great guy, really lovely and self-effacing. I know he has a reputation for arrogance, but that’s on the pitch and when you’re the best in the world I think you’re allowed to be a little cocky.”

It’s a little of that same self-confidence which has seen Hunt establish himself as the go-to tailor for stars of music, sport and film. The Manchester of the 1970s where he grew up might have been far away from the catwalks of London or Paris, but from an early age he had his own distinct style.

“I remember being taken to Burton’s to get a suit for my brother’s wedding. It was 1973, I was 12 and I said to the guy who was measuring me, ‘You know you need to leave a couple of extra inches on those trouser to cover my shoes’.

“My dad gave me a cuff round the head. He thought I was being cheeky, but I didn’t think the guy knew what he was doing. I was right, the trousers ended up too short and I refused to wear the suit.”

While he initially trained as a civil engineer, Hunt’s love of individually designed clothes remained.

“My big break came when I went down to London one weekend. I’d got all dressed up in blue flannel pegged trousers, a kipper tie, a pale blue shirt and a tweed jacket which looked a bit like an American zoot suit.

“A guy stopped me and told me he really liked what I was wearing. He was a fashion buyer and wanted to know where I bought my clothes from.”

The William Hunt brand was born and  having secured a lease on a factory in Leeds he was soon sending his own suits down south where they were stocked in a growing number of boutiques.

“I might not have had any formal tailoring experience, but a plan is a plan whether it’s for a building or a suit. Some might call it ‘winging it’, but these days they call it ‘transferrable skills’.”

It was the 1980s when Hunt opened the first of his own stores in Covent Garden. Early customers included members of Spandau Ballet and ABC and by the time he moved into the rarefied streets of Savile Row in the mid-90s Cool Britannia was coming into full swing.

“Savile Row is an interesting place. When I first went there it felt like you had to prove you came from three generations of master tailors before they would accept you as one of them. It could have been intimidating, but then I thought, ‘Why do I need to prove anything? They’re not paying my rent’.

“Britain was on a bit of a wave and we were very fortunate that bands were coming to us and our reputation spread word of mouth. That’s how we ended up providing Richard E Grant his suits for the Spice Girls movie, sometimes you are just in the right place at the right time.

“To be honest, that’s the way it’s always been, we don’t have a marketing spend like a Prada or a Gucci, but people seem to like what we do, which is classic tailoring with a twist.

“The trick is not overthinking it and not trying too hard. For me the best compliment is when someone says I don’t know why your clothes work but they do. To me that’s the epitome of style.”

While Hunt likens his off-the-peg suits to Jaguar – ‘aspirational but still affordable’ – he also has a reputation for being able to deliver one-off outlandish designs, including those insanely loud Union Jack trousers worn by Ian Poulter at the 2004 British Open.

“He’d asked me to make a pair of trousers, but I forgot all about it. Then I got a call from Ian saying, ‘Alright William, what have you got for me?’. I put the phone down, went into the studio and there was an off cut of Union Jack material that we’d used to upholster a chair.”

Necessity being the mother of invention, William got one of his team to quickly run up a pair of trousers and he delivered them personally to Poulter before the first tee.

“His first reaction was, ‘There is no way I am wearing those’. But he did. It was about the time that golf was really trying to appeal to a younger audience and that picture of Poulter went across the world. Commercially those trousers weren’t a success, but it was good for our profile.”

A more understated range of golfing wear followed and Hunt and Hunt also now runs Trilby Tours, the UK’s largest amateur golf tournament which gets a couple of million viewers when it is broadcast on Sky Sports.

“I started playing golf because I could no longer play football. I’m not great, but I did once beat Clint Eastwood at a pro-am event. He’s also one of our clients and he recommended us to Dustin Hoffman, so you never quite know who is going to walk through the door.”

Stores in Manchester and Glasgow will soon join the ones in Harrogate and Savile Row, but while Hunt has secured collaborations with the likes of Ikea – he turned their curtain material into a suit – and won awards for his perfume, it’s the times he has met and dressed his heroes that mean the most.

“A few years ago I supplied the FA Cup Final suits for Manchester Utd, which as a fan was a bit of a dream. On the morning of the match I told my brother we just needed to do a bit of work before going to the game.

“I could see he was sweating, thinking we were going to be late for kick off. I drove to the team hotel,  gave him a bag of handkerchiefs and told him to pop one in the top pocket of everyone wearing a blue suit.

“Within a few minutes he was chatting to Ryan Giggs and I was having breakfast with Alex Ferguson. Now that’s what I call good day’s work.”