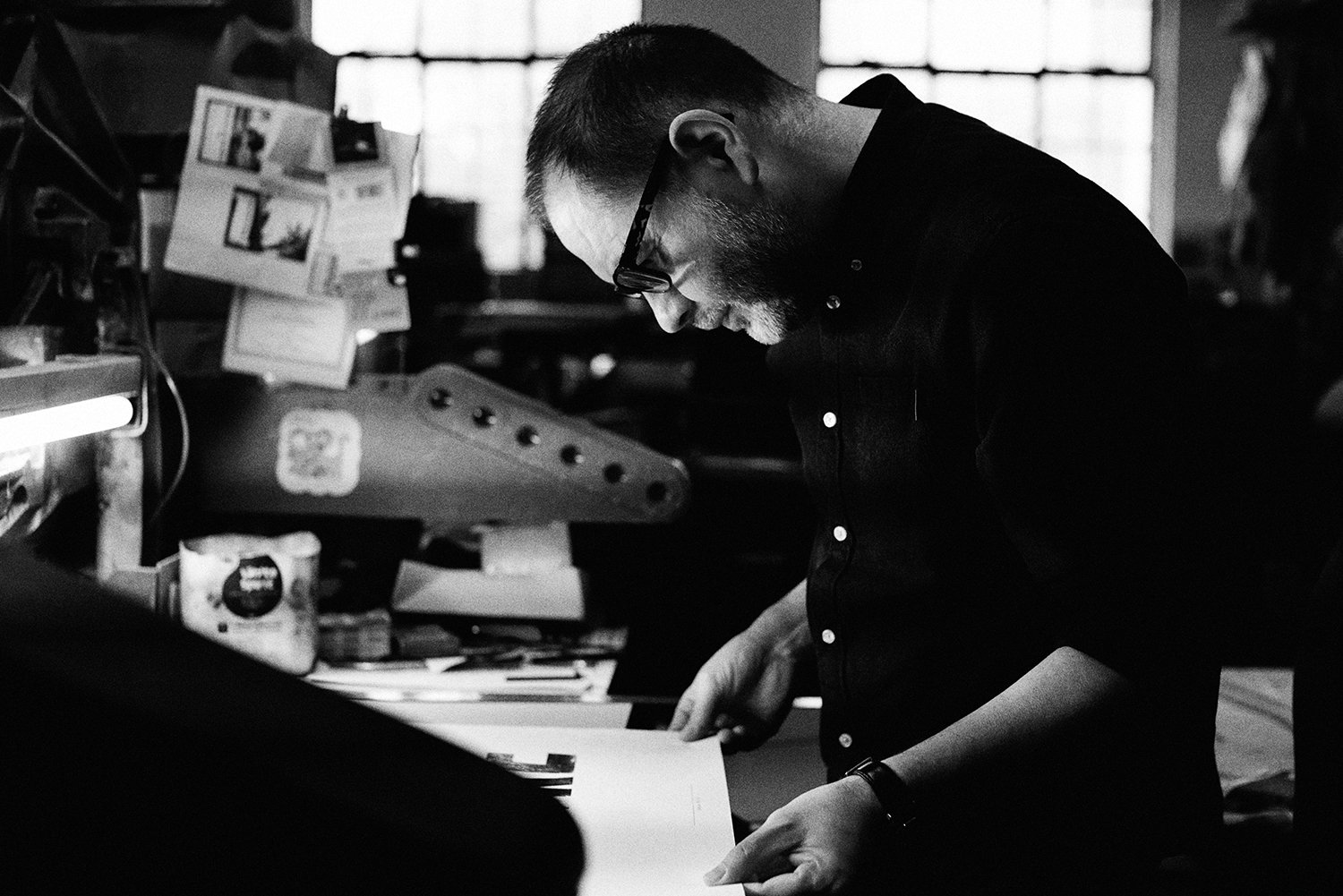 A MAN OF FEW WORDS

We catch up with the prolific artist and designer Anthony Burrill to talk about his iconic artwork, his love of Leeds and why less is more when it comes to words.

Best known for his posters of positivity; his epic messages of hope and his numerous books full of inspirational quotes, Anthony Burrill’s rise to fame has left a global audience hanging on his every word.

The artist and designer – who so beautifully combines his love and passion for old school print techniques with a simple, persuasive up-beat style narrative – has become a household name in recent years with his art reaching out and resonating with so many.

From kitchen walls to city centre murals; from offices to restaurants, and from bars to schools, Burrill’s striking typographical artwork has tapped into the psyche of a nation.

Boldly proclaiming what we’re all so often thinking and asking, Burrill puts his words of wisdom down to his northern roots, his life experiences, insights and the situations he has found himself in over the years.

Talking about his work he said: “The quotes I use are often a reflection of my own life experience, how I live my life and what is going on in the world at that time.

“I like to ask the questions rather than give the answers and if my work makes people think a little and brings some resolution, comfort and joy, then that makes me happy.

“To me it is not just about filling in the gaps with an explanation, I like to create positive propaganda that hopefully engages with the world we live in while at the same time leaves some mystery and room for interpretation.”

It is Burrill’s lifelong passion for creativity and a natural curiosity about the world we live in and the people in it that has made his work so popular.

Brought up in a pre-digital era, Burrill’s love for analogue print techniques goes back to his early days when growing up in the 70s on the outskirts of Manchester, he became obsessed with the artwork on album covers.

He said: “Like so many other designers of my generation, I was fascinated with record sleeve artwork as a teenager. I would sit for hours in my bedroom listening to music surrounded by album sleeves and creating my own designs.

“That’s where my early interest in design comes from and it was that heady mix of music and visuals that sparked my imagination and inspired me to go on to study art.”

He added: “The closest I got to anything hi-tech when I was younger was using a black and white photocopier in the college library. Everything I produced was hand-made, cut out and stuck together with glue so my visual language developed through this lack of technology and DIY approach.”

Even today, despite the incredible advances in technology, Burrill still adopts the traditional printing techniques of letter blocks and ink to deliver such bold and authentic results.

Talking about the process of producing his work, Burrill added: “I think about ideas in my head long before I start to sketch anything out and I find my most productive time is when I’m reflecting on an idea and developing my initial thoughts.

“I respond quickly to an opportunity and try to protect my first instinctive thought. I try hard not to overthink an idea and overlay too many thoughts – if an idea is good you can communicate it very quickly in just a few sentences. I like people to understand my work instantly and grasp the meaning.”

Currently working on his fifth book – which will showcase his fascinating journey and work from art student to present day –  Burrill is a man who is certainly in big demand, but thanks to his success he admits he is now in the fortunate position of being able to be more selective about the projects he works on.

One such collaboration came to life in 2020 when Burrill was asked to produce a giant typographic mural in Leeds that epitomised the mood of the nation during those dark Covid lockdown days.

Prior to gaining an MA at the Royal College of Art in London in the 90s, Burrill spent three years at Leeds Polytechnic studying graphic design and as a city he still holds very close to his heart, he was delighted to get involved.

The You&Me and Me&You mural saw Burrill’s signature letterpress typography blown up to epic proportions, covering one side of the 88-ft-high, seven-storey canal-side building, The Calls, in the city centre.

Impactful in white on black, the piece embodies Burrill’s mission to say the most with the least and connect with people through words on a monumental scale.

Burrill said: “Leeds will always be a very special city to me as it was the first place I went when I left home – it helped shape me and was the start of my journey, so I was honoured to be asked to produce it.

“For me that work signifies a particular time during the global crisis and highlights the value of relationships between people, and the simplicity of that connection.”

“It was a time to think about the things that are truly important. Life is about those we hold dear and how they each influence us. I hope the mural will remain there for decades and have the same connection with people in the future as it does now.”

For a man of few words, the inspirational and heart-warming work of Anthony Burrill will always have plenty to say.