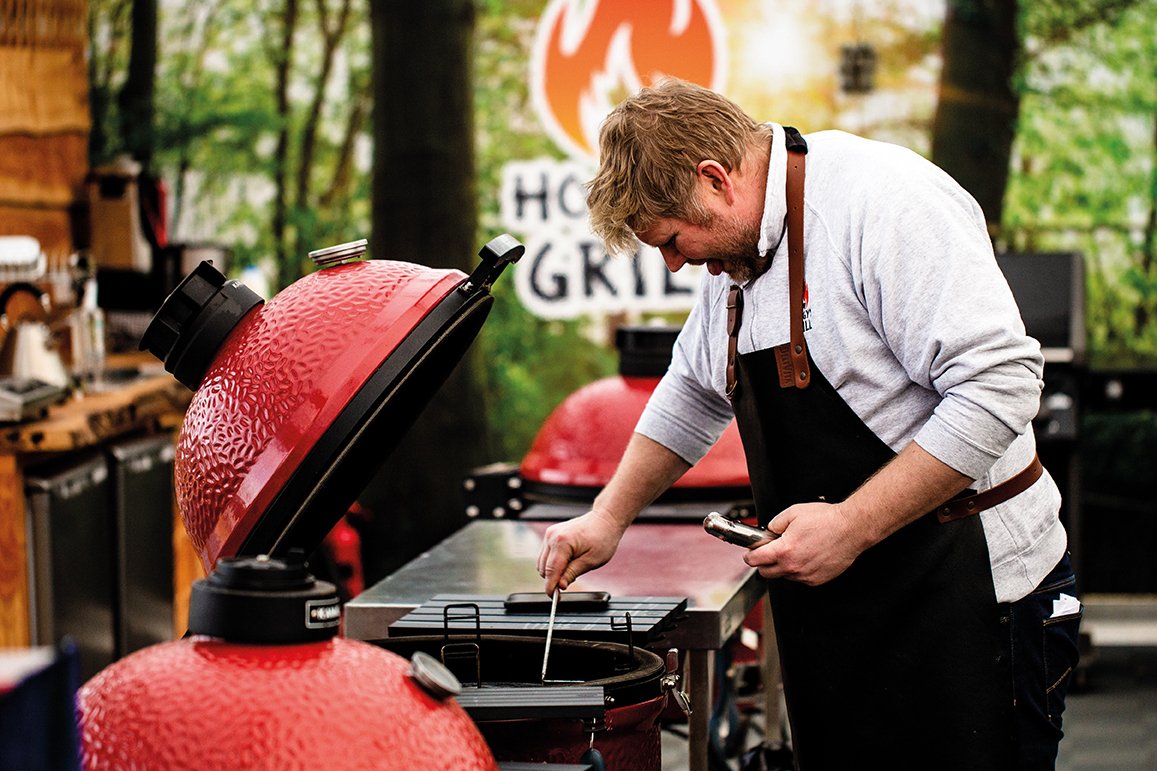 By Jeremy BlackmoreMarch 7, 2022No Comments

Matthew Hoggard was one of England’s 2005 Ashes cricket heroes but these days he’s playing with a different kind of fire. We speak to the former Yorkshire bowler and discover how he’s swapped the heat of on-field battle for a new career behind the grill.

When Matthew Hoggard quit professional cricket in 2013, he tried his hand at various jobs from insurance to coaching and commentary to guest speaking.
Nothing grabbed him and as with so many sports stars who retire after so long at the top of their game, facing up to the next chapter in his life was a daunting prospect for Hoggy.
It wasn’t until his wife Sarah issued him with a challenge to find something he was passionate about and wanted to do long-term, that the penny finally dropped.
A lifelong love of food, which had led to an appearance on BBC’s Masterchef in 2013, was the answer and he set about exploring the idea of sharing his passion for barbecuing with other people.
Now after seven years of honing his skills, learning from international BBQ chefs and experimenting on as many different grills as he could lay his hands on, the man who played 93 times for his country has launched an exciting new cooking school – Hoggy’s Grill.
Situated on the banks of picturesque Rutland Water in Leicestershire, where he finished his cricketing career, his new venture offers a range of classes where people are taught to barbecue everything from burgers and steaks to seafood, vegetarian and vegan dishes.
Along the way, Hoggard, 45, sets out to take the stress out of barbecuing, give people confidence to cook delicious meals and put an end to inedible overcooked burgers and sausages.
His passion for cooking with fire was sparked by camping as a youngster in the Yorkshire Dales and four years living in South Africa where braaing (barbecuing) over real wood was a way of life.
Talking about his new school Hoggy said: “I thought, why can’t we do a barbecue school where we teach people how to cook properly, because when you say barbecue in the UK, people rush to the shops. They burn the sausage and they undercook or overcook the chicken.
“Our whole attitude to barbecuing is outdated and everybody thinks it is a stressful mission that is far more complicated than it really is.
“I just wanted to enlighten people that you can cook anything on a grill that you can in a kitchen, you can bake cakes, you can cook Yorkshire puddings, you can cook three course meals, you can do everything as well on a grill as you can in the kitchen. Everything to me tastes so much nicer on real fire.”
Hoggard hopes to take away people’s fears and worries of barbecuing and help them become more confident to cook using flames.
“I love seeing the joy, enthusiasm and smiles on people’s faces when they learn a new skill and cooking is no different – it is a something that should be a joyful experience not a stressful one and that is hopefully what we can teach people.”
Hoggy’s Grill opened as a cookery school and grill shop just before the pandemic hit in 2020 and trade was hit hard but with restrictions now easing, he is seeing bookings soar and has some exciting plans for the year ahead.
Alongside the popular classes, Hoggy has arranged a series of themed events with famous guests coming along to talk about their sporting careers while cooking on the barbecue at the same time.
But despite been happily settled in Leicestershire, where he lives with Sarah and their 14-year-old son Ernie, Hoggy admits there is one big thing he misses about his Yorkshire roots and that is fish and chips.
He said: “That’s one thing they just can’t get right down south and having failed miserably in our search for a good chippy in Leicestershire, I decided to buy a deep fat fryer and make them myself. Now we have fish and chip Fridays and it’s the closest thing to being back home!”