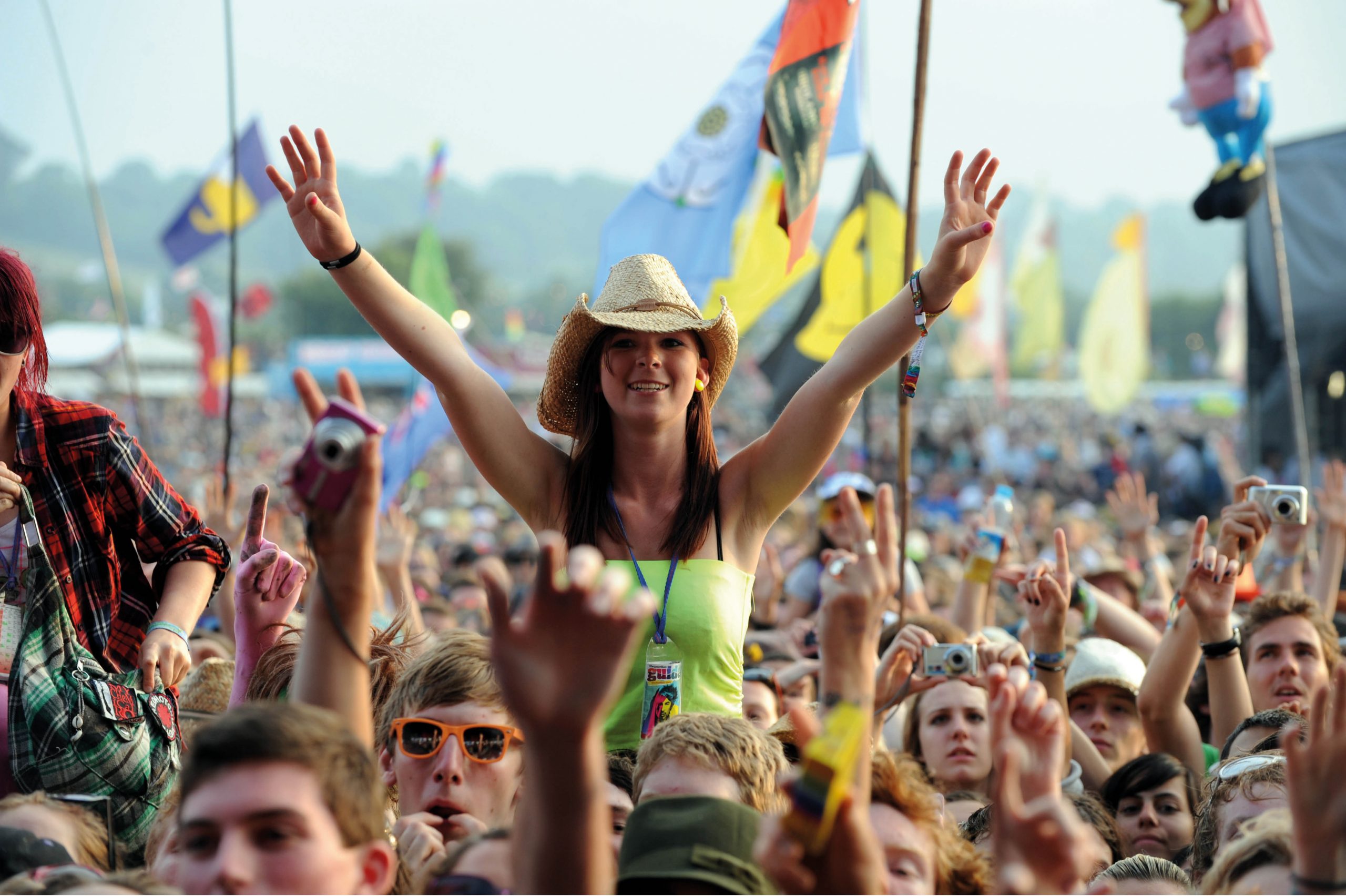 By Mark BownessSeptember 8, 2022No Comments

This year saw the full-on return of Leeds Fest and with Covid restrictions thankfully a distant memory, a generation of teenagers descended on Braham Park to make up for lost time.

It was the opportunity to finally let their hair down and the chance to welcome back even more artists from abroad as well as some of the hottest up and coming talent from the UK.

With our bucket hats pulled firmly down, the sun shining and a stellar line-up, the stage was set for a classic.

Thursday is always a bit of a funny day at Leeds Fest. The crowds arrive demob happy and restless to party. The Festival Republic stage always opens with a DJ to warm up the tent so the first live act has a challenge on their hands to keep the energy up.

The challenge this year went to Tom A. Smith who, to his credit, delivered. He played a set of lively, youthful indie rock complete with a former BBC Introducing Hottest Record in The World and a well-received cover of Swedish House Mafia’s Don’t You Worry Child.

Following him was the pink-clad bubblegum indie pop of Leicester’s SOFY. She and her band delivered a high energy set complete with Lily Allen-esque storytelling and a tribute to Eminem’s My Name Is. She proved to be an early highlight. Keep an eye out for her – she’s going places.

As the sun set, things got hazy with Lime Garden. They brought a dark electro groove that combined the gritty vocals of Stevie Nicks with the hypnotic grooves of Foals. As their set came to a close they lurched into Kraftwerk-style electronic Avant Garde. I’m not sure they’ve settled on a sound yet but their stage presence is electric – another highlight.

Rounding off the night was a one-two punch of indie rock bands The Royston Club and Cassia. The biggest cheer of the night was reserved for Royston Club who were clearly a favourite of the mostly young crowd. Yet, Cassia gave them a run for their money in terms of singalongs, and brought a breezy yet funky style to the stage. They channelled ’80s influences (and not just their floral shirts).

Friday started for us with two entries into the “girls that shred” Parthenon. First it was Dylan on the BBC Radio 1 Dance Stage who had pulled an impressive crowd so early in the day. She treated those who turned out with cover of Guns ‘n’ Roses Paradise City alongside her own brand of indie rock. Then it was local lass Abby Roberts on the Festival Republic stage who had made her fame on Tik Tok. The cover here was The Cardigans’ Love Fool.

But it seemed the Dance Stage was where it was at in the afternoon. The brilliant 100 gecs (a personal favourite) got the tent bouncing and was followed by a take-no-prisoners show from Ashnikko with her inimitable brand of explosive pop.

The evening brought with it rock in two forms to the Festival Republic stage. First lively punk from Liverpool’s Crawlers, who flamboyantly announced the release of their new album in October exclusively on stage. Then it was the hazy pop rock of blog favourite Beabadoobee who looked very at home on stage following the reception of her hit second album Beatopia

While Charlie XCX danced it up on the Main Stage East, we were enjoying a very different vibe at the Festival Republic stage thanks to the laid-back rock of Chloe Moriondo. That was followed by the eclectic hip hop of Miso Extra on the BBC Introducing stage.

Then, our night was brought to a close by male-fronted Stone at the Festival Republic stage. They brought the energy with their hyped-up, swaggering, high octane indie rock and proved to be the final highlight of our first two days.

With two days of festivalling already under our belts, it only felt right that Saturday afternoon started out as a chill one. So, while Frank Carter was throwing himself around in the audience at the Main Stage East, we started our day with the dreamy sad rock of Honeyglaze. With Nico-esque vocals and Leonard Cohen style poetic storytelling, they were just what we were craving – an early highlight.

Piri and Tommy kept things casual with their laidback approach to drum and bass on the BBC Dance Stage. Then, when The Scratch took to the stage at the Festival Republic tent, I thought we might get something gently acoustic. I was wrong. Their rousing, eccentric set of Irish folk punk not only filled the tent, it got everyone moving. The party was well and truly back on.

An eclectic remainder of the afternoon saw Sisi deliver dance and soul to the BBC Introducing stage, Witch Fever bring some manic hard rock to the Festival Republic stage (perfect for those the lamenting the lack of Rage Against The Machine), and finally a secret set from Bradford-born DJ Nia Archives back on Introducing.

It’s Saturday night where things at Leeds start to feel a little… incohesive. A lot of the punters have been there a couple of days (this intrepid reporter included) while a fresh batch of day trippers are thrown into the mix. So, I suppose that’s a long way of saying there won’t be a strong narrative going through the next part of the review.

The evening started on the Main Stage West with emo pop rockers All Time Low, then swerved into something a little edgier with Sick Joy on the Festival Republic Stage. With barely a pause for breath, it was time to catch some melodic rock from local act Dolores Forever on the BBC Introducing stage before a quick march over to the Main Stage East for modern day Shakespeare Little Simz.

As the sun set, Priestgate took to the BBC Introducing stage with a dramatic performance of frantic, Joy Division-esque alternative rock. Then, Canadian duo Cleopatrick brought some raw punk energy to the Festival Republic stage.

Yet, it all just proved a warm up for the true highlight of the day: Megan Thee Stallion on the Main Stage West. A buzzing crowd had been gathered before the stage for some time before she came on, and the hype in the air was palpable. She didn’t disappoint, sparing no attitude during a bossing set with sick flows and plenty of shaking of her (literal) money maker.

Just when I was starting to feel that I’d had my fill of live music for the weekend, Sunday at Leeds made me fall in love with it all over again. Dublin’s Thumper opened the Festival Republic stage. With two sets of drums and four guitars they created quite a unique sound that merged the three P’s – punk, psych and politics. It was a great way to start the day although the Natasha Bedingfield cover came a little out of left field.

So why not more rock? First it came in the form of Corella on the BBC Introducing Stage, then the energetic screamo of Static Dress on the Festival Republic stage. Gabe Coulterdelivered something a little more melodic and melancholic on BBC Introducing before finally we enjoyed the genre mashing flavour of De’Wayne on the Main Stage West. He proved to be a highlight

The afternoon was rounded of by a personal favourite of ours. We’ve been supporting Madison Beer since 2018 and her breakout EP As She Pleases. A critically-acclaimed album Life Support now under her belt it was going to be great to finally see her live. We weren’t the only ones thinking it. The BBC Dance Stage tent was packed out for her, and the crowd were singing every word back to her. The look of appreciation on her face was priceless. Not going to lie – I got a little teary.

By the time the evening was setting in, the arena was thronging. Where had all the people come from? Crowd dodging became the sport of the evening but we still managed to get around the stages just about.

Starting with the Main Stage West, Enter Shikari bulldozed through their set. Wandering through the crowd, political diatribe and a special appearance from Wargasm was on the menu for those who had gathered to see them.

We then added a trio of punk acts on the Festival Republic stage to our watch list. Firstly the heavy punk of Casseyette, followed by pop punk anthems from carolesdaughter, then finally the ghoulish machine gun punk of HO99O9 who proved to be another festival highlight.

But none of them could compare to the nostalgia factor of Pendulum‘s surprise set on the BBC Dance Stage. It was a treat for the (slightly) older punters at the festival (myself included), one that was made doubly sweet by an appearance from Enter Shikari‘s front man Rou Reynolds, who performed a new remix of Sorry You’re Not A Winner.

While headliners Bring Me The Horizon and Arctic Monkeys were clearly the big crowd pullers of the night, my last word goes to personal favourites Krept & Konan who closed the BBC 1xtra Stage. They attracted a devoted crowd of their own and showed why they’re the biggest names in UK drill right now.

And that’s it for another year. Your exhausted but elated reporter is signing off.

Bring me the horizon