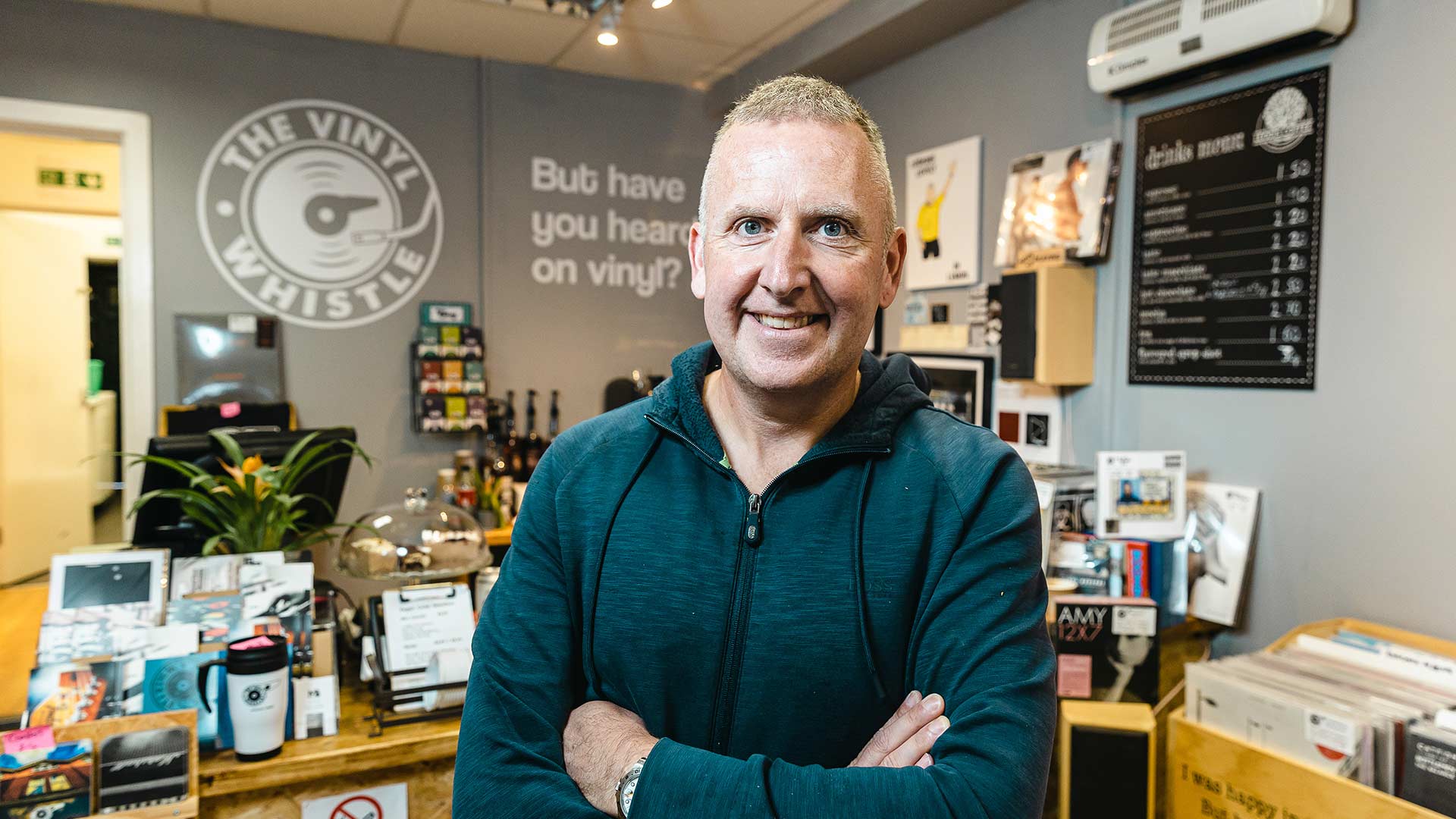 Play to the vinyl whistle

We catch up with Premier League referee Jon Moss to chat football, music and how he escapes the pressures of  the game with his own independent record shop in Leeds.

A s a young boy in the 70s and 80s, Premier League referee Jon Moss was already well accustomed to the workings of VAR.

It was his childhood passion and an obsession that remains with him to this day.

But back then it wasn’t the newly introduced Video Assistant Referee technology that kept him up at night but rather the Videos and Records he obsessively collected.

Now the man in the middle has finally fulfilled one of his greatest ambitions in life by opening his own record shop, the brilliantly named Vinyl Whistle.

Located in the heart of Headingley, where 30 years ago Jon used to live as a student, the shop is home to over 20,000 vinyl records which he has spent a lifetime collecting sourcing and listening to.

And having recently quit his other high-pressured job as a head teacher, records have become the perfect escape for the likeable Moss who for the past 12 years has been one of the Premier League’s most consistent and respected refs.

Moss has taken charge of some of the biggest games across the globe with his career highlight coming in 2015 when he was chosen to referee the FA Cup final between Arsenal and Aston Villa, but he is as happy chatting music to his many customers as he is calling the shots at Old Trafford or Anfield.

Moss opened the shop with his wife Julie in 2019 and says he has been heartened by the resurgence of record sales in recent years as a new generation buy back into the magic of vinyl.

He said: “As a student in Leeds, I had a passion for record shops. I am very into indie music and bought loads of vinyl so it seemed fitting I should open the shop in the place where I spent most of my grant money on records.

“I had this nagging feeling I could own a record shop and it would be better than some of the ones I was going in. Headingley has a real student vibe like Camden but it was missing a good record shop so I took the plunge and I couldn’t be happier with how it’s gone.

“I wanted to create a record shop that people would be genuinely excited about coming into and I don’t think there’s a better indie section in Leeds at the moment.

“I’m very lucky in that I’m still refereeing in the best league in the world whilst also being able to spend the rest of my time doing what I love the most – playing and selling records.

“I think record stores give something back to the community they serve and I love the fact people can come in and browse, have a coffee, a chat and enjoy that shared musical bond.

“There is something unique, something warm and friendly about a record store and that is what we have tried to create at Vinyl Whistle.”

As a youngster Moss was a promising player for the youth teams of his boyhood club Sunderland as well as Huddersfield, Millwall and Luton before winning a footballing scholarship to Connecticut State University.

A return to student life in Leeds put an end to those dreams and after gaining a degree in teaching and physical education, he moved into teaching full-time while at the same time taking up refereeing and slowly working his way up through the leagues before finally being appointed a Premier League ref in 2010.

It was fellow top referee Graham Scott who gave The Vinyl Whistle its name — and several other Premier League officials have dropped in to pay a visit.

Moss said: “David Coote is a massive indie fan and Martin Atkinson bought a couple of Jam records from us while Craig Pawson bought a bit of Drake, he likes his R n’ B, so we tend to put him in the corner and ignore him!”

Jon says opening his shop has also allowed fans to see the human side of the man in black.

He said: “A lot of football fans come in from around the country and I’ve met some great characters who just want to chat about refereeing and how I got into it.

“As we don’t really get the chance to talk publicly, when people come into the shop they realise we’re not as bad as they think we are.

“At the end of the day I’m just a normal person with a love of football and music and I’m very lucky to have made a career out of my two greatest passions in life.”