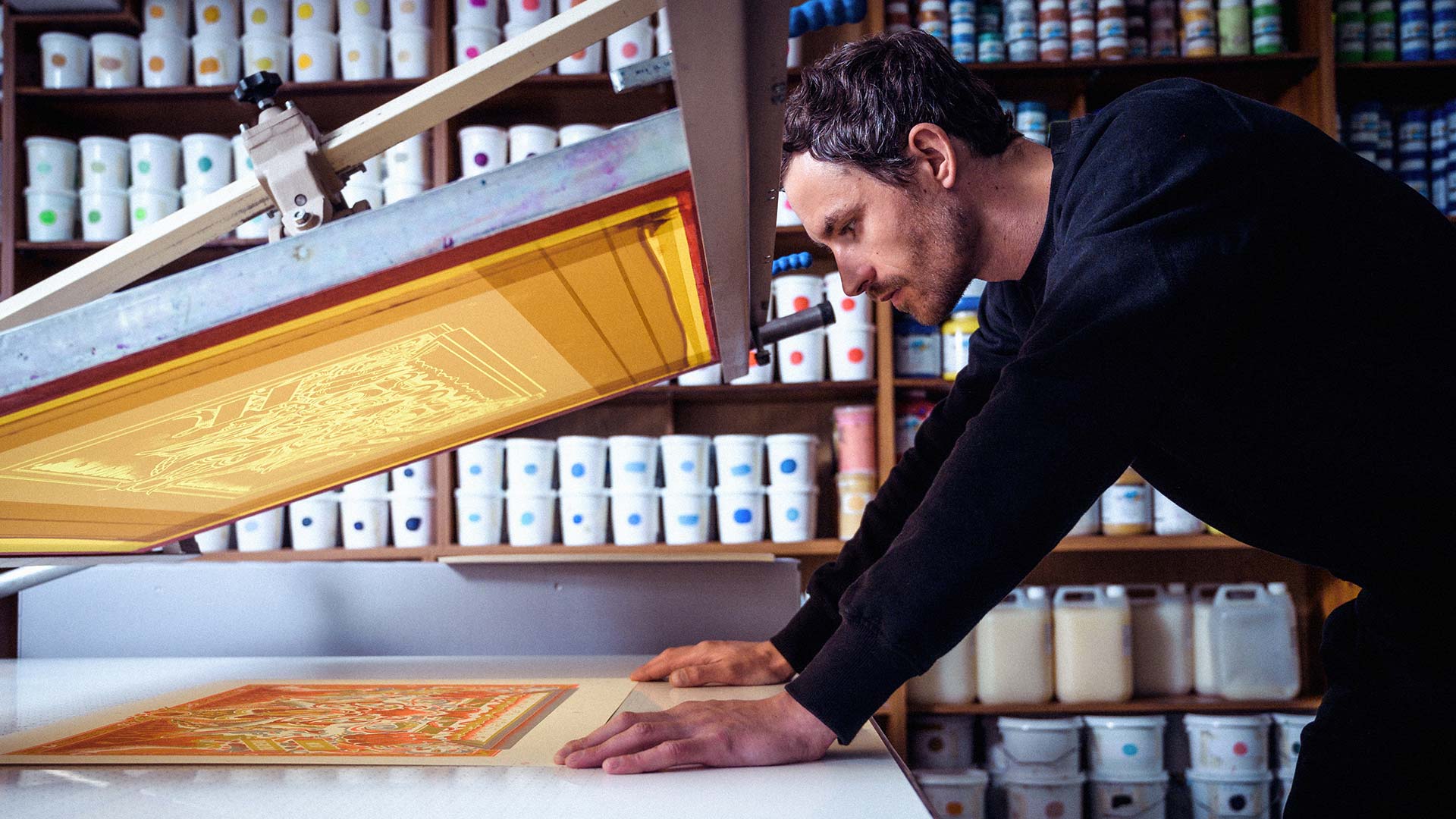 By Mark BownessJune 7, 2021No Comments

beyond catches up with the brilliant Prints of Thieves and discovers how one man’s passion for art, music and print has helped create a thriving business.

On the outskirts of Leeds, on the second floor of what was an old leather shoe mill, the production line is once again in full flow.

It’s reminiscent of the days when the old red brick Victorian building was alive to the sound of machinery and workplace to some of the city’s finest tanners.

A century on and it’s good to know the current tenants share a similar eye for quality.

But instead of a leather factory it is now home to the creative brilliance of screen print experts Prints of Thieves.

Specialists in the creation and print of gig posters for some of the world’s biggest bands and artists, Prints of Thieves was born out of one man’s lifelong passion for music and art.

Tommy Davidson-Hawley is the founder of the business which has grown from a handmade screen printing press in the corner of his band’s rehearsal room to the stylish studio where he now works.

Such is the quality of their work, Prints of Thieves are now regarded as one of the UK’s finest producers of gig posters with their work bought across the globe by thousands of fans.

The success of Prints of Thieves is testament to the hard work of Tommy and his team and the way he has amalgamated his love of art, music and printing so successfully.

Tommy, who is also the drummer in Leeds band Pulled Apart by Horses said: “I guess my journey has certainly been helped by my experience of the music industry, my love of art and my passion for traditional screen printing and I’m grateful I can combine all three in my work and life.

“From a young age I’ve always been obsessed with music and visual art and their interrelationship. One of the things that I love about making art for music is getting to immerse myself in a record and having the challenge of capturing a mood or making a visual interpretation of it.”

Whilst printing regularly for other respected artists, including Richey Beckett, Luke Drozd, WeThreeClub, Sin Eater and Yorkshire’s Drew Millward, it is his own stunning artwork and screen print techniques that bands like Arctic Monkeys, Foo Fighters, The Charlatans and Patti Smith have all used for their gig posters and which has seen him become such a prolific name in the industry.

But as with all success stories, the journey has been a tough one and after completing his graphic art degree at Leeds Beckett, Tommy worked as a painter and decorator in order to make ends meet and pursue his dream of making it in the world of art and music.

His big break came in 2011 when Nathan Clark from the Brudenell Social Club saw his work at an art exhibition in Leeds and asked Tommy to make a gig poster for the music venue.

Clark was so impressed with the quality of his work that Tommy’s posters soon became a regular feature on the scene, and it wasn’t long before word got out about the creative genius behind Prints of Thieves.

Looking back, he said: “At the time I had nothing and having run out of money to hire equipment and space I decided the only option was to build my own screen printing press.

“With some scrap wood that I got from a job I was working on, some bits I found around the streets of Hyde Park and an old hoover, I made a DIY printing setup in my band’s rehearsal space so that I could screen print my own work.”

It was the birth of Prints of Thieves, but Tommy is quick to acknowledge the generosity of those who helped him climb the ladder.

“I’ll forever be grateful to Nathan at Brudenell for that first break and to my good friend Drew Millward, who played a massive part in getting Prints of Thieves off the ground by supporting me so much in the early days.

“I’ll never forget how Drew lent me £100 when I was absolutely skint to buy some screen-making chemicals and then asked me to print some of his work for him.

“Because of his reputation and profile, it didn’t take long before I was being asked to print for more people and bigger named artists and bands soon followed.”

Screen printing is a traditional print technique that’s been used for centuries but became better known in modern culture with Andy Warhol’s work in the 60s.

Despite the fact digital printing has nowadays become much quicker and cheaper, Tommy believes there has been a real resurgence in the process and he has seen demand for his work grow online as more people enjoy the handmade quality of screen prints which are also generally limited edition and more collectible.

He explained: “The basic premise of screen printing is that a stencil is created on a fine mesh screen and ink is pushed through open areas of it with a squeegee onto the surface of the paper below.

The definition and colours of the finished artwork are incredible, and it is little wonder so many bands and artists trust Tommy and his team to bring their work to life.

He said: “It’s nice when you get to do the full process of designing a piece, printing it and then going to the gig, meeting the band or artist and seeing it sell on the merch stall, that’s always a good feeling.

“I think there will always be a place for quality print and in this binary world of tech we live, it is good to know there is still demand for something tangible to touch and own.”

Thanks to Prints of Thieves, that old leather shoe mill in Leeds is still bursting with soul.

To view and order Prints of Thieves artwork visit: