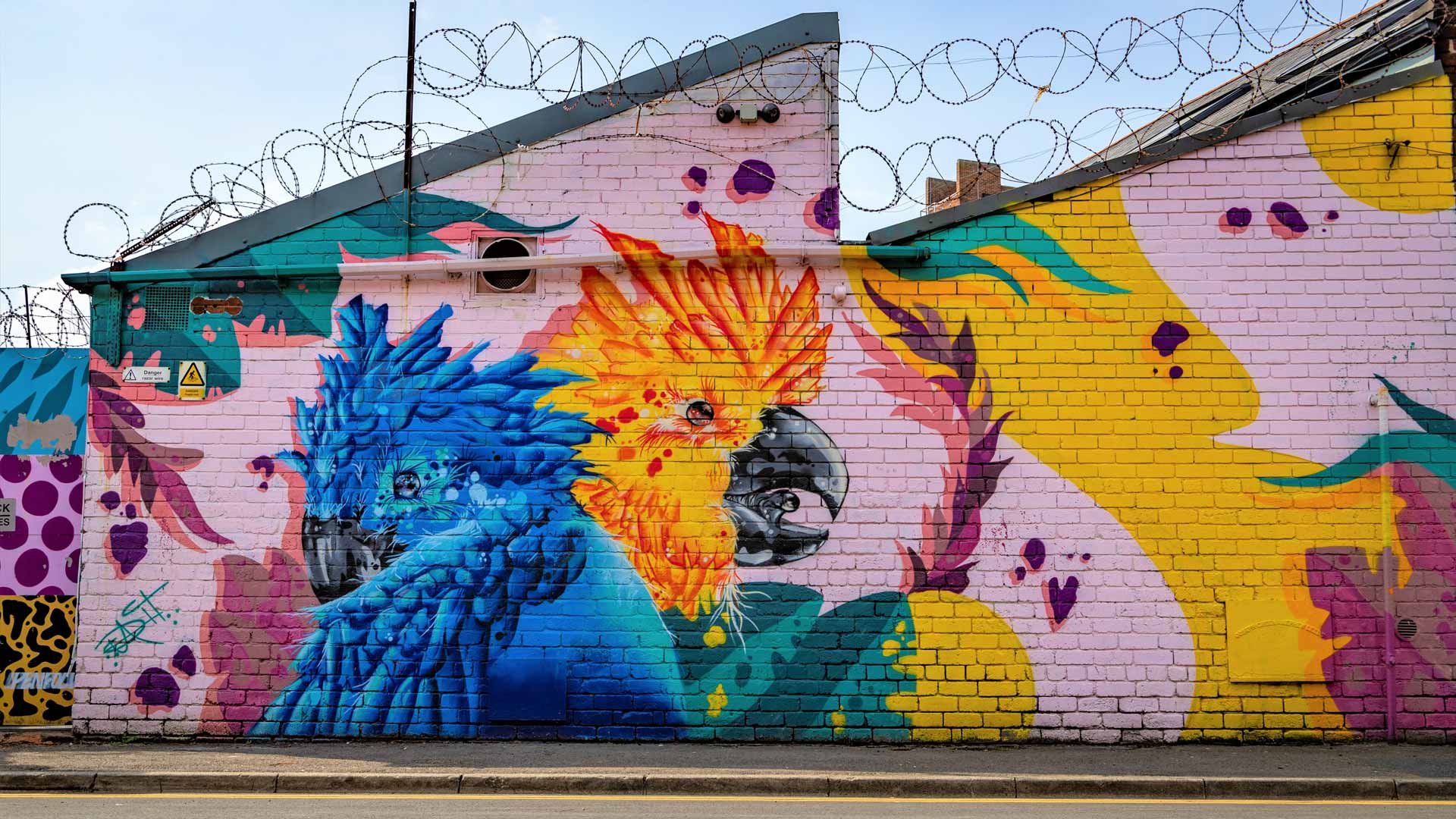 By Sarah FreemanNovember 10, 2021No Comments

A CITY WITH ART AND SOUL

From sporting legends to bold political statements, street art is making its mark across Leeds and helping to bring a much need injection of colour to the city landscape.

As you wander the streets of Leeds you can’t help but notice a growing trend that is sweeping the city and brightening up even the darkest of days.

For hidden down alleyways, underpasses and filling what were once plain and untouched walls, the city landscape has burst into life with the arrival of some of the most impressive street art imaginable.

Over the last decade, Leeds has become a mecca for art and nowhere is this more apparent than on the streets where numerous colourful murals and abstract works have helped transform the city.

One such location was the Portland Building of Leeds Beckett University. It wasn’t the kind to feature in glossy architectural magazines but last winter a lone figure began scaling the grey exterior, spray can in hand, his intention to quietly transform the building into a work of art.

The artist known as Akse P19 has been creating street art for the best part of two decades and his portrait of Leeds Rhino legend Rob Burrows, who was diagnosed with motor neurone disease in 2019 shortly after retiring, now looms large over the university campus.

Originally from France, like Banksy, Akse P19 avoids publicity – even the profile on his own website is unusually short for an artist, saying simply that he hopes to “to bring inspiration to the local community” through the subjects he paints.

Instead he simply likes to let his work do the talking and hopes his tribute to Burrows, which joins his other murals of boxer Josh Warrington on a city centre flyover and footballer Kalvin Phillips in The Calls, will inspire passersby and those who live in their shadows.

Akse P19 is just one of a number of artists using the city’s bare walls as a canvas and who works with In Good Company – an organisation who champion the rise of street art across the city.

Founder Laura Wellington said: “The street art movement is now firmly established as one of the most exciting, politically relevant and globally impactful artistic movements and we want to work with various artists to shape Leeds’ future as a destination city.

“The artists we work with are carefully curated, highly acclaimed and internationally recognised. Everyone involved understands the value that artworks can bring to the culture of a city, from inspiring joy, stimulating conversation and raising the profile of an area.”

In Good Company was key in bringing Anthony Burrill’s You & Me artwork in The Calls to life. The seeds of the project were sown back in 2019 but its message of unity was a timely one when it was unveiled at the height of the pandemic.

“From the start, the plan was that this piece will be here for the people of Leeds for centuries, but I think it’s the perfect message of unity when continued connection and community will be so vital.

“The ambition behind the creation of these new landmarks in the city is to uplift local business, particularly independent businesses and boost the visitor economy.”

The emergence of Leeds’ street art scene can be traced back to the 1980s when community artist Janet De Wagt worked with local schoolchildren to create a work of art celebrating Leeds’ West Indian community. A quarter of a century on, the Mabgate Mural which is just a short walk from the city centre, is looking a little faded, but thanks in part to a growing appreciation for street art, there is hope that it will soon be restored.

The trend has been fuelled in more recent years by artists like Jane Mutiny, whose pair of Spix’s Macaws, tucked away on the walls of Munro House, near the BBC building, draws attention to endangered species and Benjamin Craven whose striking designs on buildings like those on the Belgrave Music Hall, bring an injection of colour to the often drab urban landscape.

The Leeds based artist says of his work: “I am inspired by everyday sights. I use clashing colours and patterns and really want people who see my work to think about playfulness in art and life.”

So, wherever you wander, make sure you look up and take in some of the sights that have made the streets of Leeds such a colourful and inspirational place to be.

Me & You, You & Me by Anthony Burrill

Graphic artist Anthony Burrill combines a knack for simplicity that packs a punch with craft skills and powerful, positive messages. This mural in The Calls – his largest to date –  was devised and produced during the Covid lockdown for the city where he first studied graphic design.

The Heron by Peter Barber

Some street art demands to be looked at.
This piece by Barber, which can be found on the banks of the River Aire, is much more subtle and sometimes can’t even be seen at all. When the river level is at its highest, the heron, which was chosen as a symbol of the waterway’s revival, is submerged, only gradually reappearing again as the water falls.

In 1989, to mark the successful restoration of the Corn Exchange, Wilson was commissioned to paint a mural on the side of what is now the Blue Rinse vintage shop. It still looks good today and is a celebration of the building’s historical use as a trading centre and the Victorian age on which the city’s wealth was built.

Continuing the LUFC theme, head to Hyde Park Corner to see this masterpiece of the club’s charismatic manager. The portrait, which also includes the Bielsa quote, “A man with new ideas is a madman, until his ideas triumph”, appeared on the eve of the new football season in 2020 to mark Leeds’ return to the Premier League.